- Jobless Rate to Hold Steady at Annualized 6.4% for Second-Month.

A 15.0K rebound in Australia Employment may generate a short-term rebound in AUD/USD as market participants scale back bets for a rate cut at the Reserve Bank of Australia’s (RBA) April 7 policy meeting.

Signs of a stronger recover may encourage the RBA to retain its current policy throughout 2015, but Governor Glenn Stevens may continue to jawbone the local currency in an effort to further assist with the rebalancing of the real economy.

The resilience in building activity along with the pickup in private sector consumption may encourage Australian firms to expand their labor force, and a marked expansion in employment may spur a test of former support in AUD/USD as market participants curb speculation for lower borrowing-costs.

However, waning business confidence paired with the widening trade deficit may drag on job growth, and dismal employment print may generate fresh-lows in AUD/USD as it drags on interest rate expectations.

Price & Time: Sterling Bucks USD Strength But For How Long? 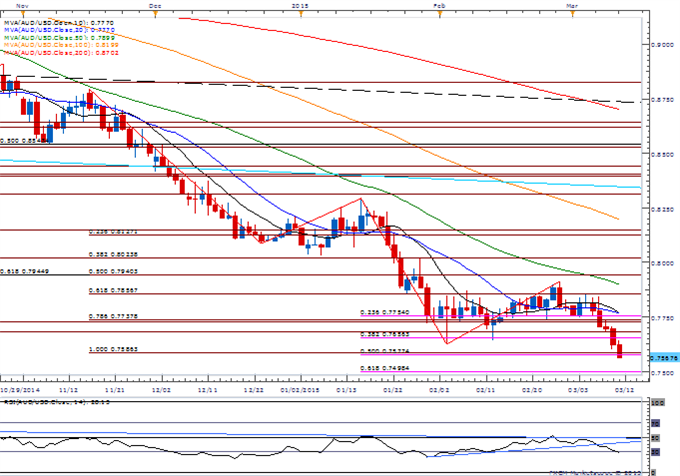 Australia employment shrank 12.2K in January 2015 after expanding a revised 42.3K the month prior. At the same time, the jobless rate increased from 6.1% to 6.4% during the same period, marking the highest level since the early 1990s. The ongoing slack in the real economy may encourage the Reserve Bank of Australia (RBA) further embark on its easing cycle in an effort to generate a stronger recovery. The Australian dollar lost ground following the worse-than-expected print, with AUD/USD slipping below the 0.7700 region to end the Asia/Pacific session at 0.7659.