Another 235K rise in U.S. Non-Farm Payrolls (NFP) accompanied by a downward revision in the jobless rate may heighten the bullish sentiment surrounding the greenback and spur a further decline in EUR/USD as it fuels bets for a mid-2015 Fed rate hike.

However, a slowdown in Average Hourly Earnings may spur a mixed market reaction as the disinflationary environment dampens the Fed’s scope to normalize monetary policy, and Janet Yellen and Co. may ultimately share a similar fate to its U.K. counterpart as wage growth continues to lag behind the economic recovery.

The expansion service-based activity along with the rising number of job openings may generate a robust employment report, and a pickup in job/wage growth may spur a bullish reaction in the greenback as it boosts bets for higher-borrowing costs in the world’s largest economy.

However, the ongoing rise in planned job-cuts paired with subdued household earnings may encourage the Fed to further delay its normalization cycle, and a marked slowdown in private wages may dampen the appeal of the reserve currency as it drags on interest rate expectations. 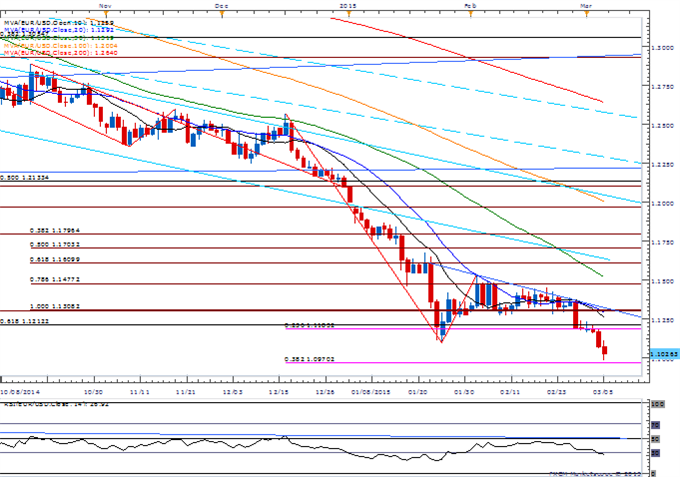 Retail Crowd Remains Net-Long EUR/USD- 1.0970 in Focus Ahead of NFP

U.S. Non-Farm Payrolls (NFPs) increased 252K jobs in the first month of 2015, exceeding the 228K forecast, with the previous month’s print upwardly revised to 353K. At the same time, the unemployment rate unexpectedly increased to 5.7% from 5.6% during the same period as discouraged workers returned to the labor force, which pushed the participation rate to 62.9% from 62.7% in December. Meanwhile, Hourly Earnings grew more-than-expected, with the figure expanding an annualized 2.2% amid market expectations for a 1.9% clip. The better-than-expected prints certainly heightened the appeal of the greenback, with EUR/USD quickly sliding below the 1.1350 level to end the day at1.1313.