AUD/USD may fail to retain the range-bound price action carried over from the previous month should the Reserve Bank of Australia (RBA) show a greater willingness to further embark on its easing cycle.

Beyond speculation for another 25bp rate cut, the forward-guidance for monetary policy may play the greatest role in driving the market reaction, and we may see Governor Glenn Stevens retain his pledge to further assist with the rebalancing of the real economy amid the weakening outlook across the Asia-Pacific region.

The deterioration in home affordability paired with downturn in business investments may encourage the RBA to further support the $1T economy, and a dovish forward-guidance for monetary policy may heighten the bearish sentiment surrounding the Australian dollar especially as the central bank head retains the verbal intervention on the local currency.

Nevertheless, improved demand from home and abroad along with sticky inflation may prompt the RBA to endorse a wait-and-see approach, and AUD/USD may face a larger correction in the days ahead should the central bank largely talk down bets for lower borrowing-costs. 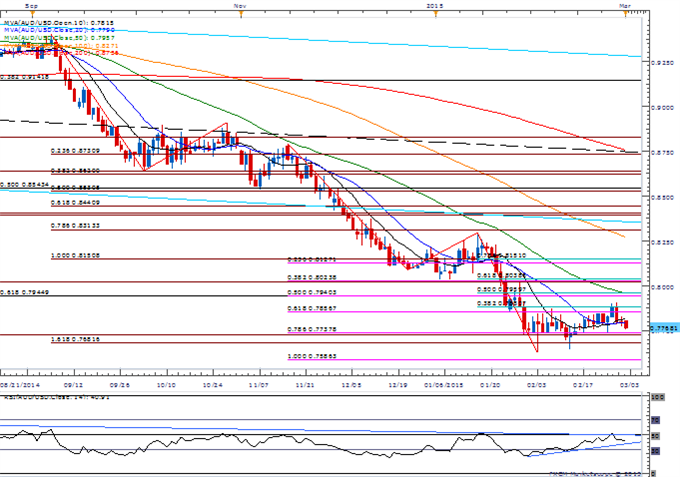 The Reserve Bank of Australia (RBA) unexpectedly cut the cash rate by 25bp to a new record low of 2.25% in February as the economic outlook remains mired by the slowdown in global growth, weak domestic demand and falling energy prices.The RBA judged that lower borrowing-costs were appropriate to further support economic activity as the economy continues to perform below-trend, and we may see Governor Glenn Stevens take additional steps to further assist with the rebalancing as the central bank head favors a further depreciation in the exchange rate. The Australian Dollar tumbled lower following the surprise rate cut, with AUD/USD extending the decline to 0.7650 as the pair ended the session at 0.7634.