Despite bets of seeing the Bank of England (BoE) further reduce its inflation forecast, the fresh batch of central bank rhetoric may encourage a more meaningful rebound in GBP/USD should Governor Mark Carney continue to prepare U.K. households and businesses for higher borrowing-costs.

Indeed, the BoE may implement a more hawkish twist to its forward-guidance as the region gets on a more sustainable path, and Governor Carney may show a greater willingness to normalize monetary policy over the medium-term as the central bank head turns increasingly upbeat towards the economy.

Subdued wage growth paired with slowdown in business outputs may push the BoE to further delay its normalization cycle, and the central bank may show a greater willingness to retain its current policy throughout 2015 in an effort to further mitigate the downside risks for growth and inflation.

Nevertheless, Governor Carney may look to raise the benchmark interest rate sooner rather than later amid the pickup in private consumption along with the ongoing improvement in the labor market, and the British Pound may show a more meaningful recovery in the days ahead should the fresh batch of central bank rhetoric boost interest rate expectations. 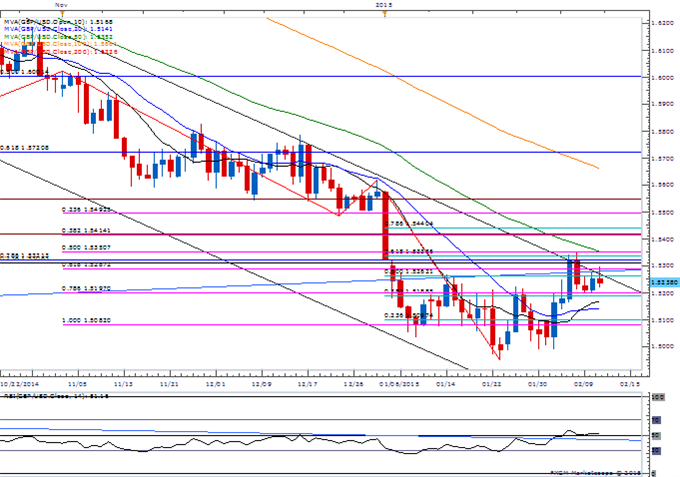 The Bank of England (BoE) struck a very dovish tone for monetary policy while delivering its quarterly inflation report as the central bank anticipates price growth to fall below 1% over the next six-months on the back of lower food and energy costs. It seems as though BoE Governor Mark Carney will further delay the normalization cycle amid the low-inflation environment, and the central bank may show a greater willingness to retain its highly accommodative policy stance for an extended period of time as the economic outlook for the euro-zone, the U.K.’s largest trading partner, remains clouded with high uncertainty. The dovish twist to the policy outlook dragged on the British Pound, with GBP/USD breaking below the 1.5800 handle during the North America trade to end the day at 1.5773.