- Average Hourly Earnings to Show the First Uptick Since July 2014.

A 230K rise in U.S. Non-Farm Payrolls (NFP) accompanied by faster wage growth may heighten the appeal of the greenback and spur a short-term selloff in EUR/USD as it boosts expectations of seeing the Federal Open Market Committee (FOMC) normalize monetary policy in mid-2015.

Indeed, a further improvement in labor dynamics may put increased pressure on the Fed to raise the benchmark interest rate sooner-rather-than-later, but the subdued outlook for inflation may prompt the central bank to further delay its normalization cycle as price/wage growth remains weak.

Improved business confidence along with the expansion in the housing market may generate a marked pickup in U.S. employment, and a positive development may heighten the bullish sentiment surrounding the greenback as a growing number of Fed official show a greater willingness to normalize monetary later this year.

However, the rise in planned job-cuts paired with the slowdown in private-sector consumption may generate a weaker-than-expected NFP print, and a dismal employment report may generate a larger correction in EUR/USD as it drags on interest rate expectations. 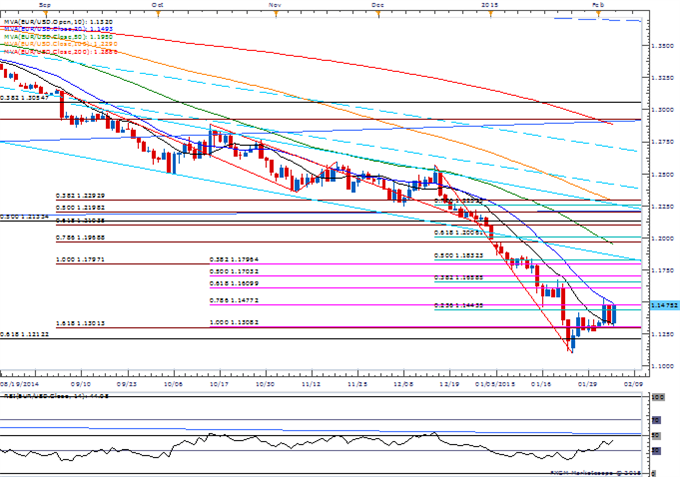 USDOLLAR - Is King Dollar About To Get Dethroned?

U.S. Non-Farm Payrolls (NFPs) beat market forecasts as the economy added 252K jobs in December following an upwardly revised 353K expansion the month prior. At the same time, the unemployment rate narrowed more-than-expected to an annualized 5.6% to mark the lowest reading since August 2008. However, Average Hourly Earnings unexpectedly slowed to 1.7% during the same period amid forecasts for a 2.2% print, and the weakening outlook for inflation may push the Fed to further delay its normalization cycle as it struggles to achieve the 2% target for price growth. Nevertheless, the initial bullish reaction in the greenback was short-lived as EUR/USD worked its way back above the 1.1800 handle, with the pair ending the day at 1.1839.