NZD/USD Rebound to Benefit from Strong NZ Employment- 0.7600 in Focus

Another 0.8% expansion in New Zealand Employment may encourage a more meaningful rebound in NZD/USD as it raises the outlook for growth and inflation.

As a result, the Reserve Bank of New Zealand’s (RBNZ) may have little choice but to retain its current policy over the near to medium-term, and Governor Graeme Wheeler may show a greater willingness to further normalize monetary policy later this year as the economic recovery gathers pace.

Improved business confidence along with the expansion in private consumption may encourage a larger-than-expected rise in New Zealand employment, and an positive labor report may heighten the appeal of the kiwi as market participants scale back bets for a rate cut.

However, lower outputs pairs with the slowdown in building activity may drag on hiring, and a dismal development may spark another selloff in NZD/USD as spurs increased bets for lower borrowing-costs in New Zealand.

GBPUSD - Working On A Bottom At Major Support 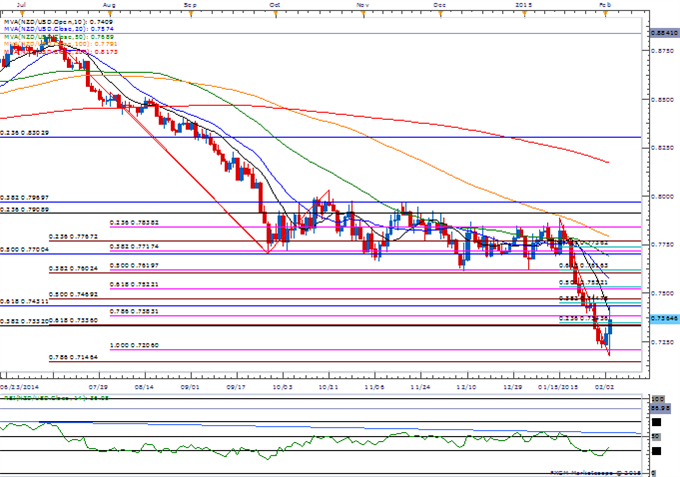 New Zealand employment unexpectedly grew 0.8% in the third quarter after expanding 0.4% during the three-months through June, while the jobless rate narrowed to an annualized 5.4% to mark the lowest price since March 2009. The ongoing improvement in the labor market may push the Reserve Bank of New Zealand (RBNZ) to further normalize monetary policy, but it seems as though Governor Graeme Wheeler will continue to implement the verbal intervention on the local currency in an effort to boost the terms of trade. Nevertheless, the New Zealand dollar strengthened following the better-than-expected prints, with NZD/USD climbing above the 0.7750 region, but the market reaction failed to materialize throughout the day as the pair closed at 0.7733.