- German Unemployment to Contract for Fourth Consecutive Month in January.

- Jobless Rate to Hold at Record-Low of 6.5% for Second Month.

Another 10K decline in German Unemployment may spur a larger rebound in EUR/USD as it props up the growth outlook for Europe’s largest economy.

Prospects for a stronger economic recovery may boost the appeal of the single currency as it limits the European Central Bank’s (ECB) scope to further embark on its easing cycle, and the Governing Council may endorse a wait-and-see approach over the near to medium-term as it gauges the impact of their non-standard measures.

Improved confidence paired with lower input costs may encourage German firms to further expand their labor force, and a marked decline in unemployment may generate a bullish reaction in EUR/USD as it raises the fundamental outlook for the monetary union.

However, slowing demand from home and abroad may drag on hiring, and a dismal labor report may fuel bets for additional monetary support as ECB President Mario Draghi retains a very dovish tone for monetary policy. 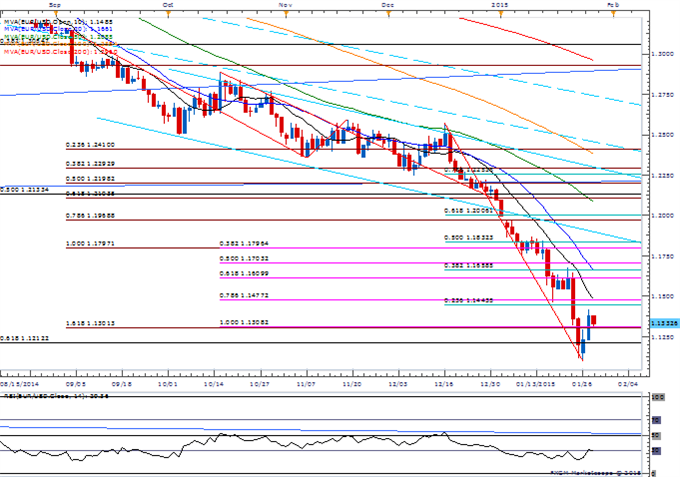 The number of unemployment in Germany slipped another 27K during the month of December, with the jobless rate pushing down to a record-low of 6.5%. Indeed, low inflation along with the robust recovery in the labor market may help to drive private-sector consumption within Europe’s largest economy, but the European Central Bank’s (ECB) may have little choice but to implement additional monetary support as it struggles to achieve its one and only mandate for price stability. Nevertheless, the market reaction to the better-than-expected print was short-lived as EUR/USD slipped back below the 1.1850 region, with the pair ending the day at 1.1822.