- Will ECB Share the Risk & Get Local Central Banks Involved?

EUR/USD may face fresh monthly lows over the next 24-hours of trade as the European Central Bank (ECB) is widely expected to announce more non-standard measures to further mitigate the risk for deflation.

Despite headlines for a EUR 50B/month asset-purchase program, the details surrounding the new initiative may play a greater role in driving EUR/USD especially as the Governing Council struggles to achieve its one and only mandate for price stability.

Indeed, the heightening risk for deflation may prompt the ECB to further embark on its easing cycle, and the central bank may keep the door open to implement additional monetary support over the near to medium-term in an effort to encourage a more sustainable recovery.

However, the ECB may provide limited details and make an attempt to buy more time as President Mario Draghi struggles to produce a unanimous vote within the Governing Council, and we may see a more meaningful rebound in EUR/USD should the central bank disappoint.

ECB Rumor Puts EUR/USD on the Rocks, >100-pip Range After US Open 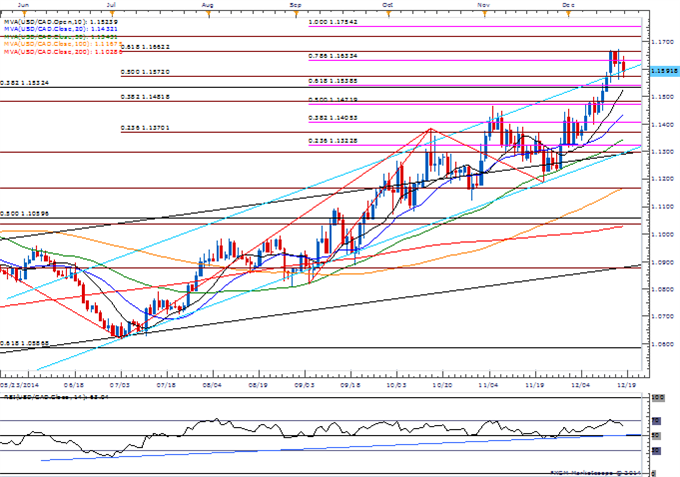 As expected, the European Central Bank (ECB) kept the benchmark rate at the record low of 0.05%, but announced it would consider a broad-based asset purchase program which could including sovereign debt next month in order to achieve a EUR 1T expansion in its balance sheet. At the same time, the ECB also lowered its economic outlook of the euro-area, with the central bank lowering its 2014/2015 forecasts for growth and inflation. Despite the dovish remarks, the Euro strengthened after the statement as the ECB further delays the QE program, with EUR/USD closing the day at 1.2376.