The U.K. Consumer Price Index (CPI) may spark a bearish reaction in GBP/USD as easing price pressures dampen the Bank of England’s (BoE) scope to normalize monetary in 2015.

However, an uptick in the core rate of inflation heighten the appeal of the British Pound and produce a larger rebound in GBP/USD as BoE Governor Mark Carney continues to prepare U.K. households and businesses for higher borrowing-costs.

Falling energy prices along with the slowdown in building activity may generate a dismal U.K. CPI print, and the sterling may face additional headwinds over the near-term should the report drag on interest rate expectations.

However, U.K. firms may boost consumer prices amid the ongoing improvement in the labor market paired with the pickup in wage growth, and the stickiness in the core rate of inflation may encourage the BoE to adopt a more hawkish tone for monetary policy as the central bank anticipates a stronger recovery in 2015. 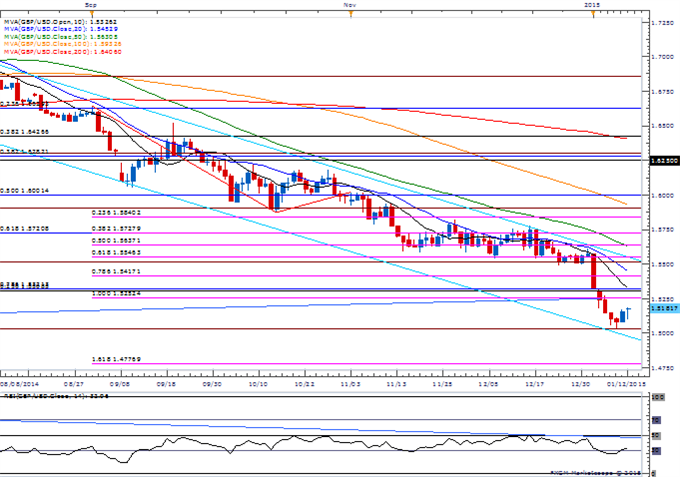 The U.K. Consumer Price Index (CPI) weakened to a 12-year low of 1.0% in November from 1.3% the month prior, while the core inflation rate also diminished to 1.2% during the same period to mark the slowest pace of growth since 2008. Easing price pressures may push the Bank of England (BoE) to further delay the first rate hike as price growth continues to undershoot the 2% target, but Governor Mark Carney may keep the door open to normalize monetary policy in 2015 as the central bank anticipates a stronger recovery in the year ahead. Despite the dismal prints, the bearish reaction in the British Pound was short-lived, with GBP/USD climbing back above the 1.5700 handle to close at 1.5724.