- Will There Be a Larger Dissent as the Fed Looks to Normalize Policy Mid-2015?

The Federal Open Market Committee (FOMC) interest rate decision may heighten the bearish outlook surrounding EUR/USD as the central bank is widely expected to implement a more hawkish twist to the forward-guidance for monetary policy.

Why Is This Event Important:Indeed, the FOMC may remove the ‘considerable time’ phrase as the central bank shows a greater willingness to normalize monetary policy in mid-2015, but we may see Chair Janet Yellen strike a more balanced tone this time around as the central bank head appears to be in no rush to remove the zero-interest rate policy (ZIRP).

The resilience in private sector consumption along with the ongoing improvement in the labor market may spur a material shift in Fed rhetoric, and the bullish sentiment surrounding the greenback may gather pace in 2015 should we see a growing number of central bank officials show a greater willingness to implement higher borrowing-costs next year.

However, the Fed may try to anchor interest rate expectations as falling commodity prices paired with subdued wage growth undermines the outlook for inflation, and the dollar may face a larger correction over the near-term should we get more of the same from the central bank.

Price & Time: Key Levels to Watch Ahead of the FOMC 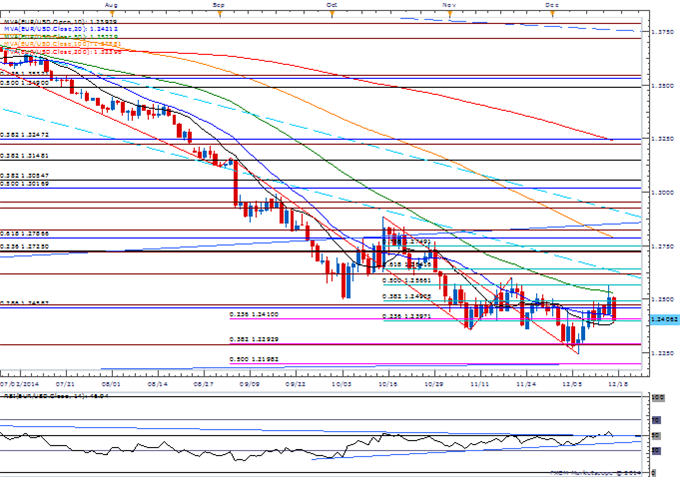 As expected, the Federal Open Market Committee (FOMC) concluded the quantitative easing (QE) program in October, but retained a dovish tone for monetary policy as the central bank looks to retain the highly accommodative policy stance for a ‘considerable time.’ Nevertheless, it seems as though the Fed remains well on its way to normalize monetary policy next year as the central bank further discusses the exit strategy. The dollar strengthened following the end of QE , withEUR/USD dipping below 1.2650 and ending the day at 1.2617.