- Core Rate of Inflation to Hold at Annualized 1.5% for Third Straight Month.

A downtick in the U.K.’s Consumer Price Index (CPI) may spur a bearish reaction in GBP/USD as slowing inflation undermines the Bank of England’s (BoE) scope to normalize monetary policy.

Nevertheless, BoE Governor Mark Carney may continue to prepare U.K. households and businesses for higher borrowing costs amid the stickiness in core inflation, and the Monetary Policy Committee (MPC) may adopt a more hawkish tone over the coming months as the central bank anticipates a faster recovery in 2015.

Easing home prices paired with lower input costs may continue to drag on the headline reading for inflation, and a dismal CPI print may spark a test of the monthly low (1.5540) as it drags on interest rate expectations.

However, U.K. firms may boost consumer prices amid the uptick in wage growth along with the pickup in private-sector consumption, and a stronger-than-expected reading may spur a more meaningful rebound in GBP/USD as it puts increased pressure on the BoE to implement a rate hike in the year ahead. 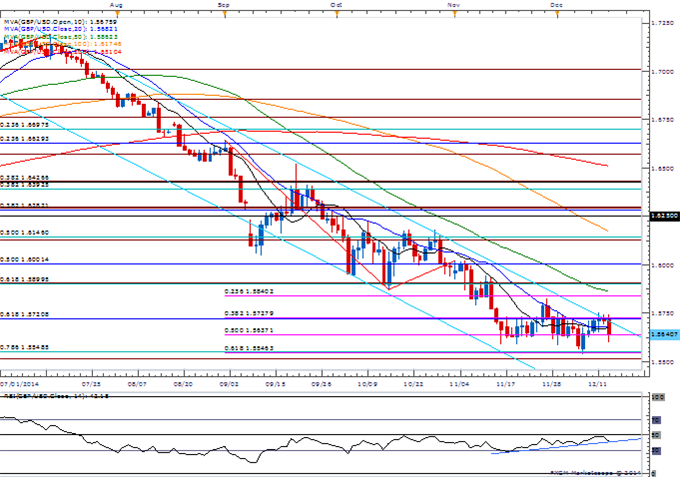 The U.K.’s Consumer Price Index (CPI) unexpectedly rebounded from a five-year low of 1.2% to 1.3% in October, while the core inflation remained unchanged at an annualized rate of 1.5% from the month prior. However, the Bank of England (BoE) may overlook the minor uptick in the headline reading for U.K. inflation as the central bank anticipates price growth to fall to 1% over the near to medium-term, and it seems as though the Monetary Policy Committee (MPC) will carry its wait-and-see approach into 2015 as the majority remains in no rush to lift the benchmark interest rate off of the record-low. Despite the better-than-expected print, there was limited follow-though behind the initial reaction as GBP/USD was largely capped around 1.5670, but the sterling struggled to hold its ground during the North American trade as the pair ended the day at 1.5606.