The Reserve Bank of New Zealand (RBNZ) is widely expected to keep the benchmark interest rate on hold at 3.50% in December, but the fresh batch of central bank rhetoric may drag on NZD/USD should Governor Graeme Wheeler retain the verbal intervention on the local currency.

As a result, NZD/USD may continue to carve lower highs & lows in December, and the policy divergence may continue to heavily impact the pair in 2015 especially as the Federal Reserve moves away from its easing cycle.

The widening trade deficit paired with the slowdown in the housing market may keep the RBNZ on the sidelines, and NZD/USD may extend the decline from the previous month should Governor Wheeler take a more aggressive approach to weaken the New Zealand dollar.

Nevertheless, the RBNZ may scale back its dovish tone for monetary policy as stronger job & wage growth raises the fundamental outlook for the region, and NZD/USD may face a more meaningful rebound in the days ahead should the central bank show a greater willingness to lift the cash rate in 2015. 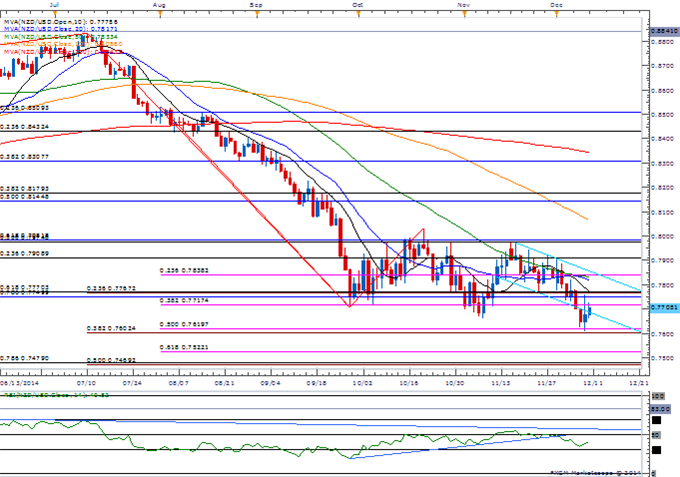 Despite above-trend growth, the Reserve Bank of New Zealand (RBNZ) kept the Official Cash Rate (OCR) 3.50% on the back of ‘modest’ inflation. It seems as though the RBNZ is in no rush to further normalize monetary policy as Governor Graeme Wheeler argues for a period of assessment before considering additional adjustment, and the New Zealand dollar remains at risk of facing additional headwinds over the near-term as the central bank retains the verbal intervention on the local currency. Despite the initial dip below 0.7775, the market reaction was short-lived, with NZD/USD closing the day at 0.7784.