- Australia Employment Expected to Increase for Sixth Time in 2014.

Another 15.0K rise in Australia Employment may generate a more meaningful rebound in AUD/USD as it boosts the growth and inflation outlook for the $1T economy.

However, the long-term outlook for AUD/USD remains bearish as the Reserve Bank of Australia (RBA) remains in no rush to normalize monetary policy, and the bearish sentiment surrounding the aussie may gather pace in the year ahead especially as Governor Glenn Stevens retains the verbal intervention on the local currency.

Australian firms may continue to expand their labor force amid the pickup in private consumption along with the ongoing expansion in building activity, and a positive employment may heighten the appeal of the Australian dollar as it raise the RBA’s scope to normalize monetary policy sooner rather than later.

However, waning business confidence paired with the deeper contraction in service-based activity may drag on job growth, and a dismal development may spark another selloff in AUD/USD as it puts increased pressure on the RBA to revert back to its easing cycle. 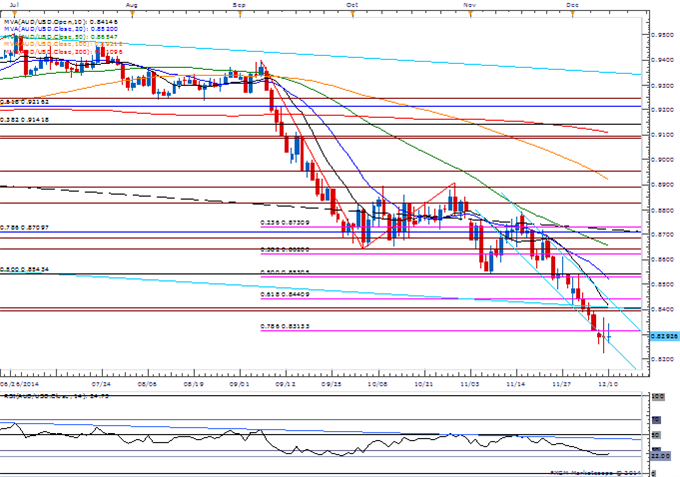 Australia employment advanced 24.1K in October following a revised 23.7K contraction the month prior, while the jobless rate printed at a 12-year high of 6.2%. Despite the better-than-expected print, the persistent slack in the labor market may continue to limit the Reserve Bank of Australia’s (RBA) scope to lift the benchmark interest rate off of the record-low as the central bank aims for a more sustainable recovery. Despite the initial bearish reaction in AUD/USD, the Australian dollar recouped the losses throughout the day as the pair closed at 0.8616.