- Jobless Rate to Hold at 5.8% for Second Consecutive Month.

The U.S. Non-Farm Payrolls (NFP) report may spark a bearish reaction in EUR/USD as market participants expected another 230K rise in employment paired with an uptick in wage growth.

A batch of positive developments may spark another near-term rally in the greenback especially as a growing number of Fed officials show a greater willingness to normalize monetary policy in 2015.

The decline in planned job cuts along with the pickup in economic activity may generate a strong employment report, and the dollar may continue to outperform against its major counterparts over the near to medium-term amid growing bets for higher borrowing-costs in the U.S.

However, the employment report may disappoint amid the ongoing slack in the labor market, and the greenback may face a larger correction over the near-term as a weaker-than-expected NFP print drags on interest rate expectations. 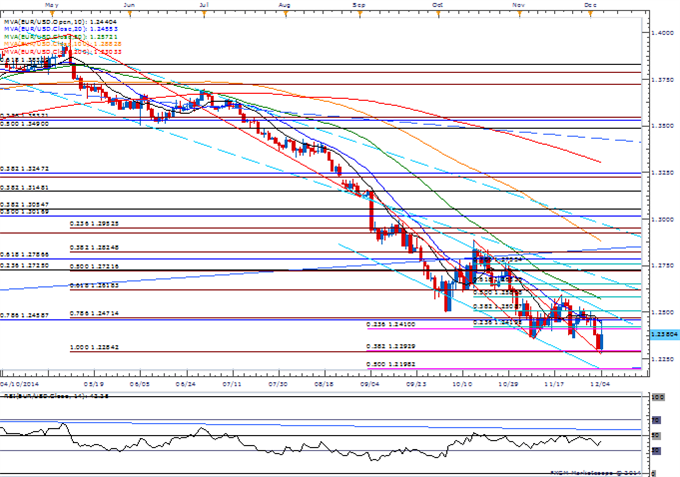 U.S. Non-Farm Payrolls (NFPs) increased another 214K in October following a revised 256K expansion the month prior, marking the consecutive 9th month with an employment increase over 200K. Despite the weaker-than-expected print, the unemployment rate unexpectedly slipped to an annualized 5.8% from 5.9% during the same period to mark the lowest reading since August 2008. Moreover, the report continued to highlight anemic wage growth as Average Hourly Earnings held steady at 2.0%, and the subdued outlook for inflation may encourage the Fed to retain its highly accommodative policy stance for an extended period of time in an effort to foster a stronger recovery. The greenback largely struggled to hold its ground following the mixed print as EUR/USD held above the 1.2400 handle going into the European close, with the pair ending the day at 1.2453.