- European Central Bank (ECB) to Keep Rates on Hold Ahead of T-LTRO.

- Will ECB Show a Greater Willingness for Quantitative Easing?

EUR/USD may continue to mark fresh monthly lows over the next 24-hours of trade should the European Central Bank (ECB) take additional steps to further support the monetary union.

Indeed, there’s growing speculation that the Governing Council will broaden the scope of its non-standard measures while implementing a large-scale quantitative easing (QE) program to better achieve its one and only mandate for price stability, and the single currency remains at risk of facing additional headwinds in 2015 as the outlook for growth and inflation remains subdued.

Waning inflation expectations paired with the persistent slack across the monetary union may prompt the ECB to further embark on its easing cycle, and we may see ECB President Mario Draghi continue to strike a dovish tone in 2015 in an effort to encourage a more sustainable recovery.

Nevertheless, the ECB may merely reiterate the policy statement from the November 6 meeting as the central bank gauges the impact of the targeted Long-Term Refinancing Operations (T-LTRO), and we may see a relief rally in EUR/USD should the Governing Council make an attempt to buy more time. 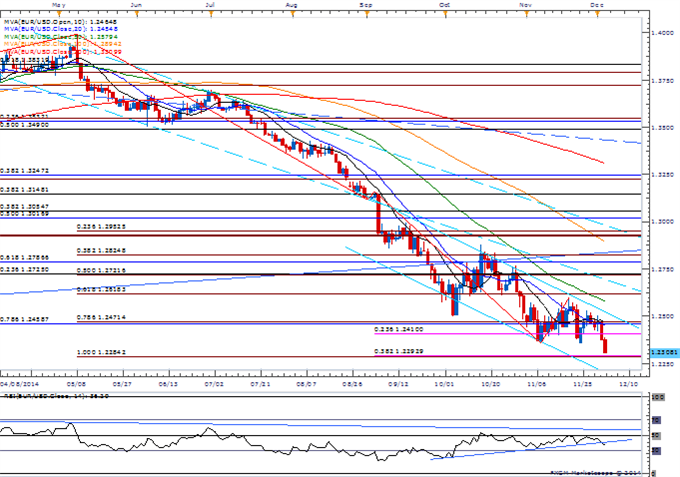 The European Central Bank (ECB) held the benchmark rate steady at the record low of 0.05% for another month, while pledging to provide additional monetary stimulus if needed amid the weakening outlook for growth and inflation. Moreover, ECB President Mario Draghi noted that the ECB will start buying asset-backed securities (ABS) in the coming days and may look to incorporate purchases of private-sector debt and even government bonds in order to achieve a EUR 1T expansion of its balance sheet. As a result, the ECB may sound increasingly dovish going into 2015 as the central bank struggles to achieve its one and only mandate for price stability. The dovish-twist to the forward-guidance dragged on the Euro, with EUR/USD sliding below the 1.2400 handle to end the day at 1.2370.