- Reserve Bank of Australia (RBA) to Keep Cash Rate at 2.50% for 15-Consecutive Meetings.

The Reserve Bank of Australia’s (RBA) interest rate decision may prompt another near-term decline in AUD/USD should the central bank toughen the verbal intervention on the local currency.

The slowdown in China – Australia’s largest trading partner – may become a growing concern for the RBA amid the weakening outlook for global trade, and Governor Glenn Stevens may implement a more aggressive approach to weaken the Australian dollar in an effort to further assist with the rebalancing of the real economy.

Subdued wage growth along with the ongoing deterioration in home affordability may push the RBA to adopt a more dovish tone for monetary policy, and AUD/USD may face another near-term decline should we see a growing number of central bank officials show a greater willingness to revert back to an easing cycle.

However, Governor Stevens may sound more upbeat this time around amid the pickup in job growth paired with the rebound in private consumption, and the AUD/USD may face a larger rebound over the next 24-hours of trade should the fresh batch of central bank rhetoric boost interest rate expectations.

Central Banks in Focus this Week as RBA, ECB Meet, NFPs on Friday 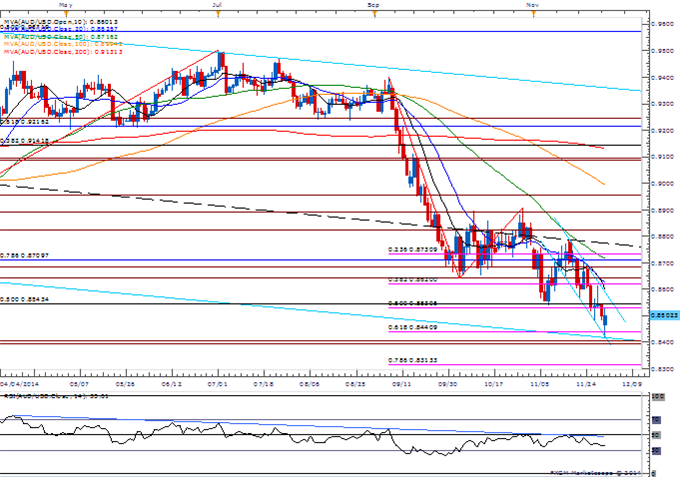 As expected, the Reserve Bank of Australia (RBA) kept the cash target rate at a record-low of 2.50% in November in an effort foster a stronger recovery. Indeed, Governor Glenn Stevens continued to highlight a neutral tone for monetary policy as the central bank head favors a period of interest rate stability, but the Australian dollar remains at risk for a further decline as the RBA argues that the local currency remains overvalued. Despite the initial push higher, there was limited follow-through behind the market reaction as AUD/USD ended the day at 0.8731.