- Canada Gross Domestic Product (GDP) to Slow for Second-Time in 2014.

- Growth Rate to Hold Above 2% for Second Consecutive Quarter.

Canada’s 3Q Gross Domestic Product (GDP) report may generate a near-term bounce in USD/CAD as the growth rate is expected to increase an annualized 2.1% following the 3.1% expansion during the three-months through June.

A marked slowdown in economic activity may undermine the appeal of the Canadian dollar as the Bank of Canada (BoC) remains reluctant to further normalize monetary policy, and the USD/CAD may continue to track higher in December as Governor Stephen Poloz continues to talk down interest rate expectations.

Easing demand for Canadian assets paired with the ongoing slowdown in the housing market may continue to drag on the growth rate, and a dismal GDP print may spur a near-term breakout in USD/CAD as it gives the BoC greater scope to retain a wait-and-see approach for an extended period of time.

However, the resilience in private sector consumption along with the pickup in job growth may foster a faster rate of growth, and a better-than-expected GDP figure may generate a further decline in USD/CAD as it retains the descending channel formation from earlier this month.

For LIVE SSI Updates Ahead of Canada’s GDP Report, Join DailyFX on Demand 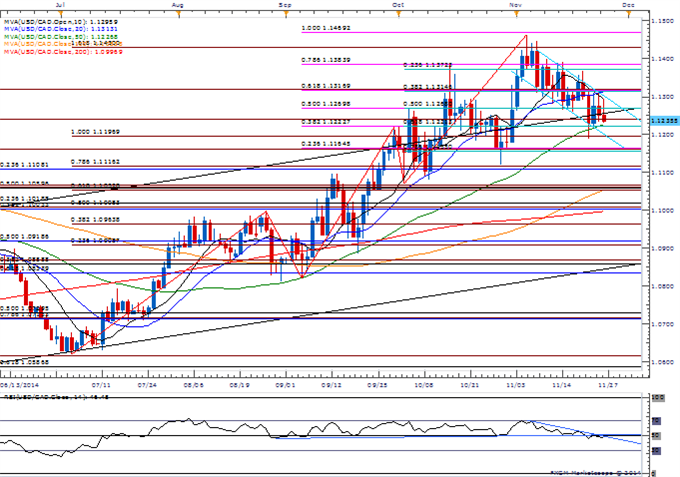 The Canadian economy grew more-than-expected, with the growth rate climbing an annualized 3.1% in the second quarter after expanding 2.3% during the first three-months of 2014. The larger-than-expected pickup in 2Q GDP showed a broad-based pickup in nearly all segments, especially in exports and consumer spending. As a result, the Bank of Canada (BoC) may come under increased pressure to raise the benchmark interest rate sooner rather than later especially as the region faces the highest rate of inflation amongst the G10 countries. The loonie strengthened against its U.S. counterpart following the release, but the market reaction was cut short during the North American trade as pair ended the day at 1.0876.