- Will the Fed Implement Hawkish-Twist to the Forward-Guidance for Monetary Policy?

The Federal Open Market Committee (FOMC) meeting minutes may heighten the bullish sentiment surrounding the U.S. dollar should we see a growing number of central bank officials show a greater willingness to move away from the zero-interest rate policy (ZIRP).

Why Is This Event Important:With growing speculation for a Fed rate hike in mid-2015, a more hawkish twist to the forward-guidance for monetary policy may spur a near-term selloff in EUR/USD especially as the European Central Bank (ECB) prepares to implement more non-standard measures in December.

The pickup in private consumption along with the ongoing recovery in household sentiment may encourage the FOMC to adopt a more hawkish tone for monetary policy, and the bearish outlook for EUR/USD may continue to take shape over the near to medium-term amid the growing deviation in the policy outlook.

However, the majority of the FOMC may endorse a more neutral tone for monetary policy as subdued wage growth continue to dampen the risk for inflation, and the central bank may endorse a wait-and-see approach over the coming months amid the slowdown in Europe and the Asia-Pacific region. 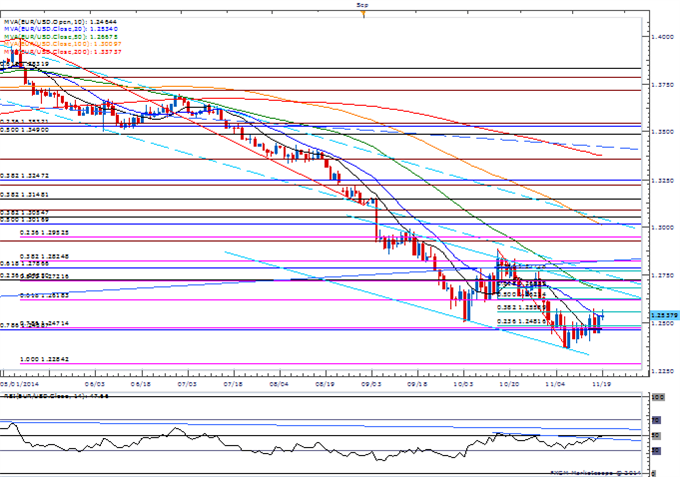 The Federal Open Market Committee (FOMC) struck a similar tone to the policy statement following the September 17th meeting, with the central bank reiterating that the monetary policy outlook will largely be data dependent. At the same time, the Fed curbed its growth forecast for the second half of the year amid growing concern that the ongoing appreciation in the U.S. dollar will have a larger dampening effect on the real economy. Comments surrounding the exchange rate dragged on the greenback, with EUR/USD breaking above the 1.2740 and ending the day at 1.2742.