- Core Rate of Inflation to Rebound from Lowest Reading Since 2009.

Beyond the headline reading for U.K. inflation, an uptick in the core Consumer Price Index (CPI) may generate a near-term rebound in GBP/USD as the Bank of England (BoE) largely remains on course to normalize monetary policy in 2015.

Despite the downward revision to the BoE’s growth & inflation forecast, sticky price growth in the U.K. may spur a greater dissent within the Monetary Policy Committee (MPC), and it seems as though Governor Mark Carney will continue to prepare household & businesses for higher borrowing-costs as the economic recovery becomes more broad-based.

Higher wage growth paired with the pickup in business outputs may generate a stronger-than-expected CPI print, and stick price pressures should help to improve the appeal of the sterling as it boosts interest rate expectations.

However, U.K. firms may continue to offer discounted prices amid falling input prices along with the slowdown in private-sector consumption, and a dismal inflation report may spur fresh monthly lows in GBP/USD as the Federal Reserve shows a greater willingness to normalize monetary policy in the year ahead. 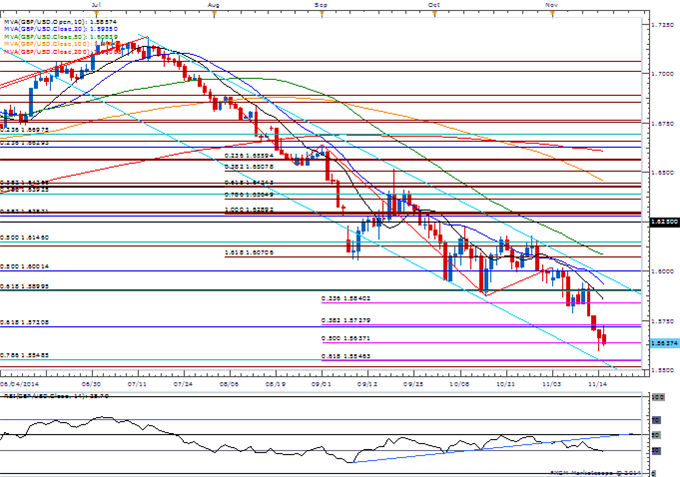 The U.K.’s Consumer Price Index (CPI) unexpectedly slipped to a five-year low of 1.2% in September, with the core rate of inflation also narrowing to an annualized 1.5% from 1.9% in August. Indeed, teasing price pressures may encourage the Bank of England (BoE) to retain its current policy throughout the remainder of the year, but it seems as though the central bank will stay on course to raise the benchmark interest rate in 2015 as Governor Mark Carney sees a sustainable recovery in the U.K. The sterling lost ground against its major counterparts following the release, with GBP/USD dipping back below the 1.6000 handle to end the day at 1.5907.