- Will the BoE Inflation Report Drag on Interest-Rate Expectations?

Trading the Bank of England (BoE) Inflation report may not be clear cut even with expectations for a downward revision in the central bank’s growth/inflation forecast as Governor Mark Carney continues to prepare U.K. households and businesses for higher borrowing-costs.

The fresh batch of central bank rhetoric may continue to drag on interest rate expectations as the majority of the Monetary Policy Committee (MPC) remains in no rush to normalize monetary policy, but the BoE may stick to its current course to raise the benchmark interest rate in 2015 amid the ongoing recovery in the real economy.

Easing inflation along with the slowing consumption may encourage the BoE to adopt a more dovish tone for monetary policy, and GBP/USD may continue to carve lower highs & lows throughout the remainder of the year should the central bank scale back its willingness to remove the highly accommodative policy stance.

However, the BoE may largely retain an upbeat view for the U.K. economy amid the rise in business outputs paired with the ongoing improvement in the labor market, and the British Pound may continue to pare the losses carried over from the previous month should the fresh batch of central bank commentary prop up interest rate expectations. 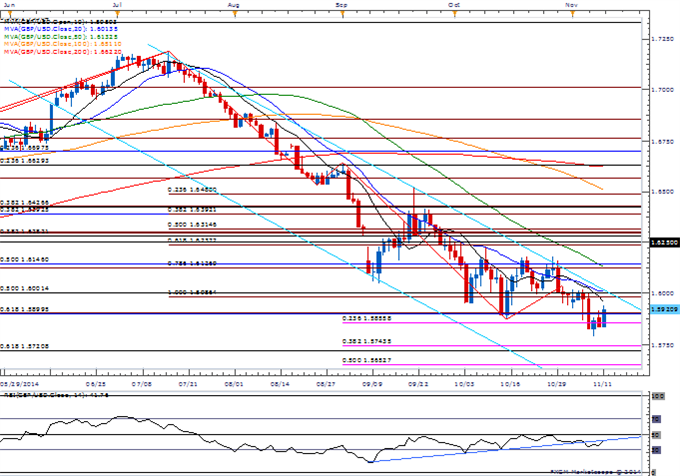 In the latest Inflation Report, the Bank of England (BoE) raised its 2014 growth forecast to 3.5% from 3.4%, but went onto say that now is not the time for a U.K. rate increase as the central bank slashes its wage growth outlook. Indeed, BoE Governor Mark Carney stated that the forward-guidance for monetary policy remains unchanged amid the reduction in spare capacity, but concerns over weak wage growth, muted exports and heightening geopolitical tensions may continue to dampen the appeal of the British Pound as it drags on interest rate expectations. The sterling tumbled lower on the back of the relative dovish BoE statement, with GBP/USD slipping below the 1.6700 handle during the North America trade to close at a low of 1.6678.