- European Central Bank (ECB) to Retain Current Policy Ahead of Next T-LTRO in December.

- Will ECB Expand the Scope & Attractiveness of Non-Standard Measures?

The EUR/USD may face another selloff in the days ahead should the European Central Bank (ECB) adopt a more dovish tone and offer additional monetary support to prop up the ailing economy.

The ECB may take a more aggressive approach in expanding its balance-sheet amid the growing threat for deflation, but we may see a relief rally in the EUR/USD should the Governing Council merely make an attempt to buy more time.

The ECB may expand the scope of its asset-purchase program to include a broader range of assets amid the weakening outlook for growth and inflation, and the bearish sentiment surrounding the EUR/USD looks poised to gather pace over the medium-term as the Governing Council further embarks on its easing cycle.

Nevertheless, ECB President Mario Draghi may promote a wait-and-see approach as the central bank continues to assess the impact of the non-standard measures, and the Euro may face a more meaningful rebound in the days ahead if we see more of the same from the Governing Council’s October 2 meeting. 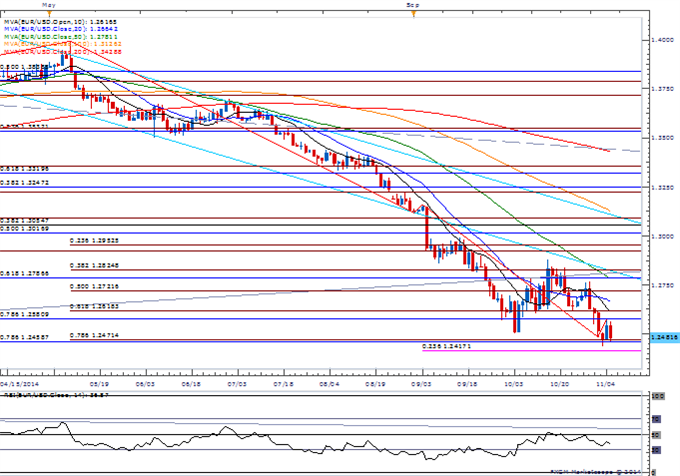 The European Central Bank (ECB) kept the benchmark interest rate unchanged at the historical low of 0.05%, while unveiling the details of the asset purchase programme. The ECB would start with covered-bond purchases in late October, which will be followed by the asset-back securities (ABS) programme in December, with the non-standard measure largely aimed at mitigating the downside risk for growth and inflation. However, the ECB may sound increasingly dovish over the remainder of the year as the monetary union faces a growing risk of slipping back into recession. Nevertheless, the Euro gained following the initial announcement, with EUR/USD climbing above the 1.2675 region, but Euro struggled to hold its ground throughout the North American trade as the pair ended the day at 1.2654.