A faster rate of expansion in New Zealand Employment may generate a more meaningful rebound in NZD/USD as it boosts interest rate expectations.

Despite the verbal intervention, a marked pickup in job growth may put increased pressure on the Reserve Bank of New Zealand (RBNZ) to further normalize monetary policy, and the NZD/USD may make another near-term run at the 0.8000 handle should the report raise the outlook for growth and inflation.

Firms in New Zealand may further expand their labor forces as they boost production, and a stronger-than-expected print should trigger a bullish reaction in NZD/USD as it boosts interest rate expectations.

However, the slowdown in global trade along with efforts to cool the housing market may drag on the labor market, and a dismal employment print may spur fresh yearly lows in NZD/USD as it gives the RBNZ greater scope to retain its current policy for an extended period of time.

Sign Up for DailyFX on Demand for Real-Time SSI Updates! 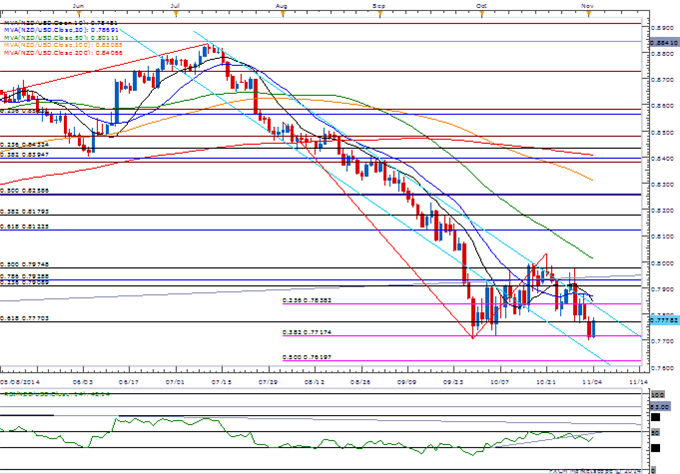 Employment in New Zealand increased 0.4% during the second-quarter after expanding 0.9% in the three-months through June, while the jobless rate unexpectedly fell to 5.6% to mark the lowest reading since March 2009. Despite the downtick in unemployment, the persistent slack in the real economy may further delay the normalization cycle as the Reserve Bank of New Zealand (RBNZ) endorses a neutral outlook for monetary policy. Nevertheless, the initial market reaction to the release was short-lived as the NZD/USD ended up closing the day at 0.8446.