-Will Governor Glenn Stevens Continue to Implement the Verbal Intervention?

Even though the Reserve Bank of Australia (RBA) is widely expected to keep the benchmark interest rate at 2.50% in November, the AUD/USD remains vulnerable to further losses as Governor Glenn Stevens retains the verbal intervention on the aussie.

Indeed, the central bank head may even take a more aggressive approach in jawboning the local currency amid the slowing recovery in China – Australia’s largest trading partner – and we may see renewed bets for additional monetary support on the back drop of the weakening outlook for global growth.

The persistent slack surrounding the region may push the RBA to adopt a more dovish tone for monetary policy, and the AUD/USD may mark fresh lows over the near-term should the RBA toughen the verbal intervention to further assist with the rebalancing of the real economy.

However, we may get more of the same from Governor Stevens as the central bank head remains confident in achieving a sustainable recovery, and the AUD/USD may continue to face range-bound prices if the RBA shows a greater willingness to normalize monetary policy in the year ahead.

Sign Up for DailyFX on Demand for Real-Time SSI Updates!

Price & Time: Where To Next For USD/JPY?

Monetary Policy on Trial with RBA, ECB, and NFPs this Week 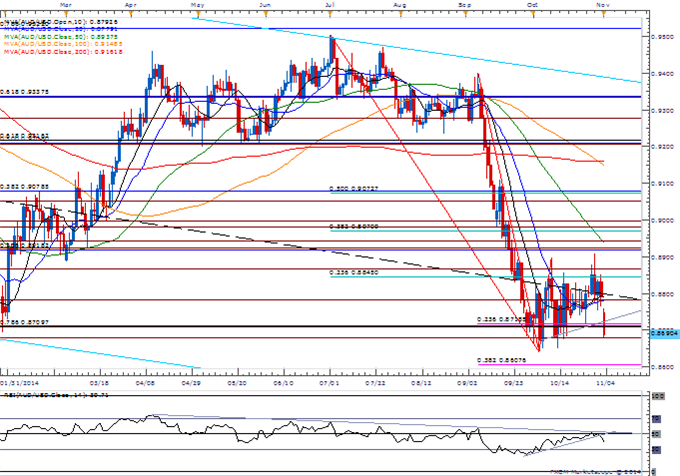 The Reserve Bank of Australia (RBA) stuck to its current policy and left the target cash rate at the historical low for another month, but went onto say that the Australian dollar remains high relative to the decline in commodity prices as the central bank continues to see a period of interest rate stability in the $1T economy. Despite the verbal intervention, the AUD/USD traded above the 0.8800 handle following the rate decision, but struggled to hold its ground throughout the day as the pair closed at 0.8793.