The U.K.’s 3Q Gross Domestic Product (GDP) report may spur a lower-low in GBP/USD should the advance reading drag on interest rate expectations.

A marked slowdown in the U.K. economy may continue to spur a 7-2 split within the Monetary Policy Committee (MPC) as Governor Mark Carney remains in no rush to normalize monetary policy, and the GBP/USD may face a further decline over the remainder of the year as the Fed prepares to exit it easing cycle.

Lower business outputs paired with the slowdown in private-sector consumption may dampen bets of seeing a stronger recovery in the U.K., and a dismal 3Q GDP print may trigger fresh monthly lows in the GBP/USD especially as the BoE retains a rather neutral tone for monetary policy.

Nevertheless, the expansion in building activity along with the ongoing improvement in the labor market may pave the way for a better-than-expected growth report, and a positive development may spur a larger dissent within the BoE as the fundamental outlook for the U.K. improves. 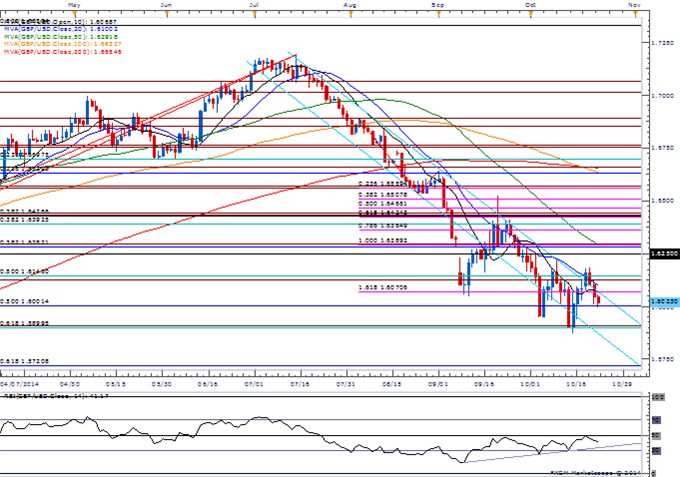 As expected, the U.K. economy expanded another 0.8% in the second quarter of 2014 following the 0.8% rate of growth in the first three months of the year. The lackluster recovery in the U.K. may continue to drag on interest rate expectations as the Bank of England (BoE) remains in no rush to normalize monetary policy, and the British Pound may face additional headwinds over the rest of the year should the central bank scale back its willingness to raise the benchmark interest rate off of the record-low. The initial reaction was largely mixed as the GBP/USD quickly fell back from the 1.6990 region, and the pair continued to consolidate throughout the North American trade as it ended the day at 1.6974.