- Australia Consumer Price Index (CPI) to Slow From Fastest Pace of Growth Since 2011.

- Core Inflation to Fall Back From Highest Reading Since 2010.

A marked slowdown in Australia’s Consumer Price Index (CPI) may spur a bearish break in the AUD/USD as it puts increase pressure on the Reserve Bank of Australia (RBA) to keep the benchmark interest rate on hold for an extended period of time.

At the same time, it seems as though RBA Governor Glenn Stevens will retain the verbal intervention on the Australian dollar in order to further assist with the rebalancing of the $1T economy, and the AUD/USD remains at risk for a further decline as the central bank head remains in no rush to normalize monetary.

Subdued wage growth paired with the persistent weakness in the labor market may drag on inflation, and a marked slowdown in the CPI may renew bets for additional monetary support amid the weakening outlook for global growth.

However, the ongoing expansion in building activity may generate a stronger-than-expected inflation print, and sticky price pressures may boost interest rate expectations as the central bank continues to see a more meaningful recovery in 2015. 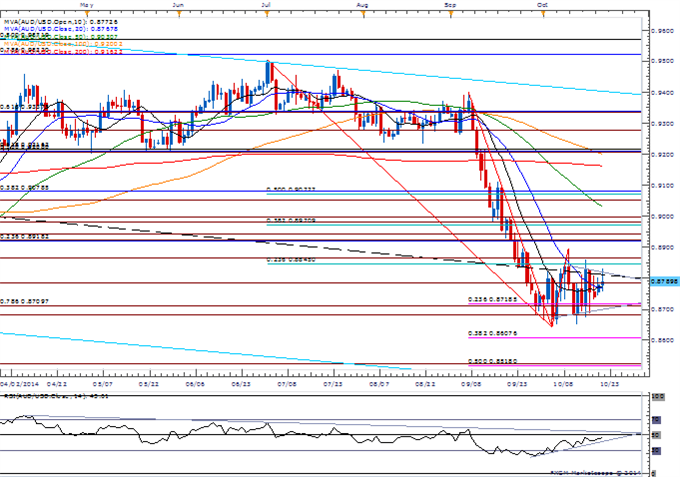 Price & Time: When Does the USD Trend Resume?

Australia’s 2Q Consumer Price Index (CPI) came in line at an annualized rate of 3.0% after expanding 2.9% during the first three-months of 2014, while the core inflation unexpectedly surged to a 4-year high of 2.9%. Heightening price pressures may continue to dampen bets of seeing the the Reserve Bank of Australia (RBA) further embark on its easing cycle, but it seems as though the central bank is in no rush to normalize monetary policy as the persistent strength in the Australian dollar dampens the outlook for growth and inflation. Nevertheless, the better-than-expected CPI prints spurred a bullish reaction in the Australian dollar, with the AUD/USD climbing above the 0.9400 handle and ending the Asia-Pacific trade at 0.9445.