- Canada Consumer Price Index (CPI) to Slow After Holding at 2.1% for Last Two-Months.

- Core Inflation to Retain the Fastest Pace of Growth Since April 2012.

A slowdown in Canada’s Consumer Price Index (CPI) may generate a further advance in USD/CAD as it gives the Bank of Canada (BoC) greater scope to retain its current policy throughout the remainder of 2014.

However, the stickiness in core inflation may heighten the appeal of the loonie as it puts increased pressure on central bank Governor Stephen Poloz to adopt a more hawkish tone for monetary policy, and the USD/CAD may face a larger pullback ahead of the October 22 policy meeting should the report boost interest rate expectations.

However, higher wage growth paired with expectations for a faster recovery may boost price pressures in Canada, and a strong inflation reading should spur a bullish reaction in the Canadian dollar as it raises the BoC’s scope to further normalize monetary policy. 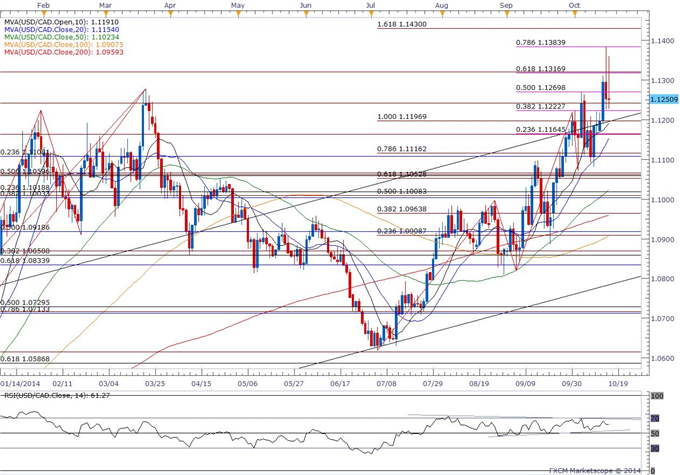 Price & Time: To Bounce, Or Not To Bounce - That Is The Question

Canada’s Consumer Price Index (CPI) held steady at an annualized rate of 2.1% in August, while the core CPI unexpectedly increased to 2.1% from 1.7% in July, marking the highest reading since May 2012. Though the rise in core inflation may put increased pressure on the Bank of Canada (BoC) to raise the benchmark interest rate, it seems as though the central bank will retain its neutral tone for some time as the fundamental outlook remains clouded by the weakness in global growth. The better-than-expected core inflation print propped up the Canadian dollar, with the USD/CAD dipping below 1.0900 following the release, but the loonie struggled to hold the gains during the North America trade as it closed at 1.0957.