- Wage Growth to Pick Up for Second Month to Annualized 0.7% in August.

Another 35.0K decline in U.K. Jobless Claims should raise the prospects for a stronger recovery, but the Average Hourly Earnings print may have a greater impact on the GBP/USD as the weakening outlook inflation drag on interest rate expectations.

Indeed, the larger-than-expected slowdown in the U.K. Consumer Price Index (CPI) may give the Bank of England (BoE) greater scope to retain its highly accommodative policy stance for an extended period of time, but a marked pickup in wage growth may spur a greater dissent within the Monetary Policy Committee (MPC) as the economic recovery becomes more broad-based.

Increased demand from home and abroad along with the ongoing strength in building activity may generate a meaningful pickup in job & wage growth, and a positive developments should spur a bullish reaction in GBP/USD as it renews bets for higher borrowing costs in the U.K.

However, we may continue to see subdued wage pressures in the U.K. as businesses scale back on production, and the majority of the BoE may look to carry the current policy well into 2015 amid the persistent slack in the real economy. 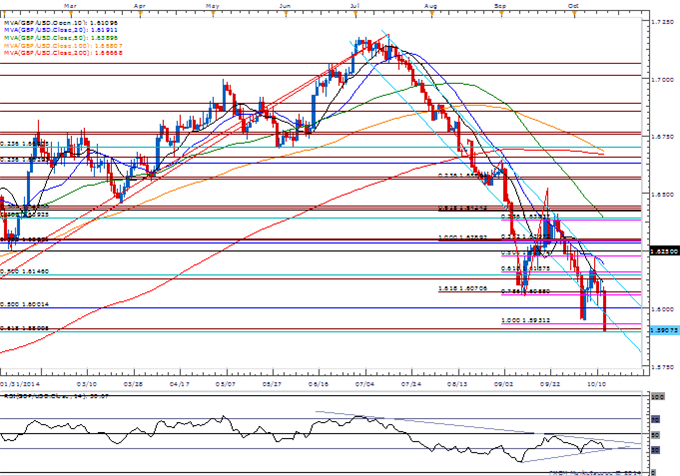 U.K. claims for jobless benefits declined another 37.2K in August to mark the fourth consecutive decline of more than 30.0K, while the ILO Unemployment Rate unexpectedly fell to an annualized 6.2% in July to mark the lowest reading since December 2008. Despite the ongoing recovery in the labor market, it seems as though the Bank of England (BoE) will keep its currency policy till year-end as wage growth in the U.K. remains largely subdued. Nevertheless, the GBP/USD struggled to hold above the 1.6300 region amid the fresh developments coming out of the BoE Minutes, but the pair strengthened during the North American trade, with the pair closing at 1.6265.