- Core Rate of Inflation to Downtick for The Fourth Time This Year.

A further slowdown in the U.K.’s Consumer Price Index (CPI) may bring up fresh monthly lows in the GBP/USD as it gives the Bank of England (BoE) greater scope to retain its highly accommodative policy stance for an extended period of time.

Subdued price growth in the U.K. may continue to foster a 7-2 split within the Monetary Policy Committee (MPC), and a weak CPI print may drag on interest rate expectations as Governor Mark Carney remains in no rush to normalize policy.

Easing home prices paired with lower input costs may generated a dismal inflation print, and a marked slowdown may spark a more meaningful run at the 1.5900 handle as the GBP/USD retains the bearish momentum from July.

However, the uptick in wage growth along with the resilience in private-sector consumption may generate a strong CPI figure, and an unexpected pickup should generate a larger rebound in the pound-dollar as it renews bets for higher borrowing costs in the U.K.

Price & Time: Do or Die Levels For Risk? 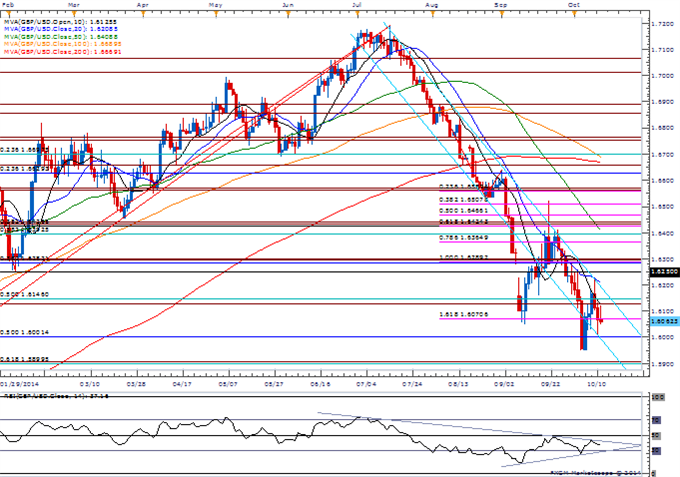 The U.K.’s Consumer Price Index (CPI) slowed as expected to an annualized 1.5% in August from 1.6% the month prior. However, the core rate of inflation beat market forecasts as the reading unexpectedly advanced to 1.9% from 1.8% in July. Easing price pressures was mainly seen in food and non-alcoholic drinks, which marked the largest decline in more than a decade. Subdued inflation increases the probability that the Bank of England (BoE) will retain its current policy throughout 2014, but we may see a growing rift within the central bank amid the stickiness in the core CPI. The sterling showed a choppy reaction following the mixed print, but the GBP/USD firmed up during the North American trade to end the day at 1.6275.