- Canada Employment to Increase for Fifth Month in 2014.

- Jobless Rate to Hold at Annualized 7.0% for Third Consecutive Month.

The USD/CAD may face a larger pullback going into the end of the week should Canada’s Employment report show a meaningful rebound in job growth and fuel interest rate expectations.

An upbeat employment print may put increased pressure on the Bank of Canada (BoC) to further normalize monetary policy, but we would need to see a material shift in the forward-guidance to adopt a bullish outlook for the Canadian dollar as Governor Stephen Poloz continues to endorse a period of interest rate stability.

Easing input costs along with the pickup in private sector activity may generate a strong pickup in job growth, and a positive print may threaten the opening monthly range in the USD/CAD as it boosts interest rate expectations.

However, weakening demand at home and abroad may drag on employment, and a dismal development may heighten the bullish sentiment surrounding the USD/CAD as it gives the BoC greater scope to retain its current policy for an extended period of time. 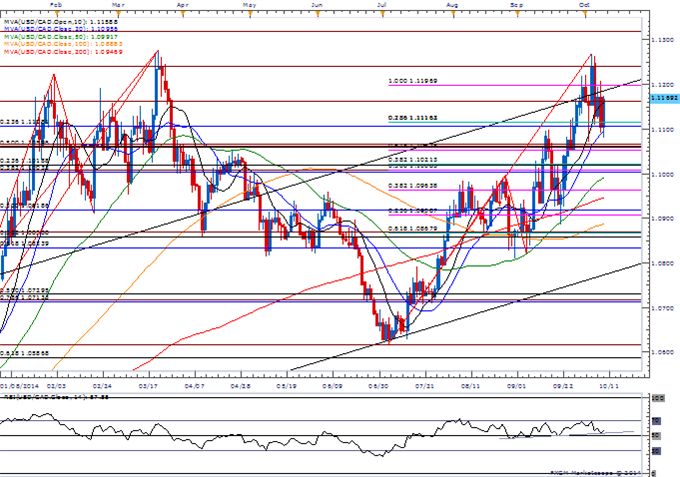 The Canada employment report disappointed, with the region shedding 11.0K jobs in August after adding 41.7K the month prior. Despite a downtick in the participation rate to 66.0% from 66.1%, the unemployment rate held steady at an annualized 7.0% for the second consecutive month. As a result, it seems as though the Bank of Canada will retain its neutral tone for monetary policy and keep the benchmark interest rate at 1.00% throughout the remainder of the year in an effort to encourage a more robust recovery. The reaction to the dismal reading was short-lived as the USD/CAD chopped around the 1.0880 level during the North America trade, with the pair closing at 1.0879.