GBP/USD to Threaten Bearish Momentum on Hawkish BoE- 1.6300 Up Next?

- Will We Continue to See a 7-2 Split Within the Monetary Policy Committee (MPC)?

The Bank of England (BoE) interest rate decision may generate a further decline in the GBP/USD should the central bank refrain from releasing a policy statement and make further attempts to buy more time.

It seems as though we will continue to see a 7-2 split within the Monetary Policy Committee (MPC) as the majority remains reluctant to normalize monetary policy, and the bearish sentiment surrounding the British Pound may gather pace over the remainder of the year unless we see a more hawkish twist to the forward-guidance for monetary policy.

Slowing outputs and easing home prices may push the majority to maintain the highly accommodative policy stance well into 2015, and the GBP/USD may continue to give back the advance from July 2013 should Governor Mark Carney talk down bets for higher borrowing costs.

Nevertheless, sticky inflation paired with expectations for a faster recovery may prompt the BoE to shift gears sooner rather than later, and the GBP/USD may break out of the near-term bearish trend should the central bank adopt a more hawkish tone for monetary policy.

Bearish GBP Trade: No Policy Statement & More of the Same from BoE 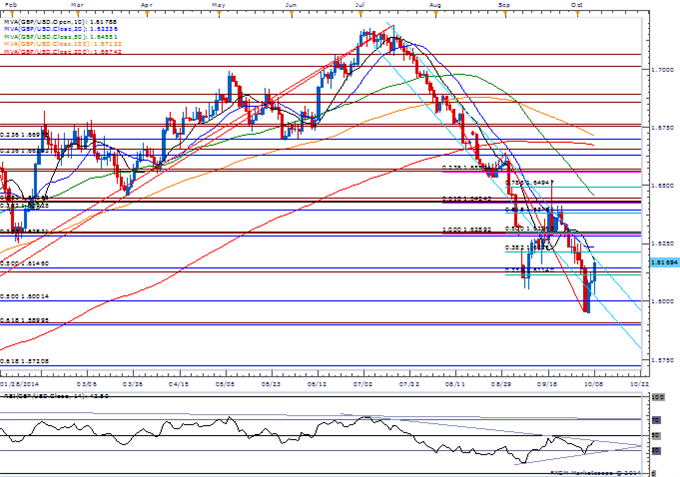 As expected, the Bank of England (BOE) maintained its highly accommodative policy stance in September, with the central bank keeping the benchmark interest rate at 0.50% while retaining the asset purchase facility at 375B. Moreover, the Monetary Policy Committee (MPC) once again refrained from releasing a policy statement and provided little evidence for a material shift in the policy outlook. Despite the muted market reaction, the GBP/USD lost ground during the North American trade, with the pair closing the day at 1.6309.