- Australia Employment to Increase for Seventh Month in 2014.

- Jobless Rate to Hold at Annualized 6.1% for Second Straight Month.

Another 15.5K rise in Australia Employment may generate a more meaningful rebound in the AUD/USD as it puts increased pressure on the Reserve Bank of Australia (RBA) to normalize monetary policy sooner rather than later.

However, trading the data print may not be as clear cut as the Australian Bureau of Statistics looks to revise the July and August prints, and RBA Governor Glenn Stevens may continue to endorse a neutral policy stance throughout the remainder of 2014 in an effort to mitigate the downside risks for growth and inflation.

The housing boom may continue to boost job growth as the RBA keeps the benchmark interest rate the record-low of 2.50%, and a positive employment print may fuel interest rate expectations as the central bank remains upbeat on the rebalancing of the $1T economy.

Nevertheless, the jobs report may disappoint amid the slowdown in private consumption along with the ongoing contraction in business outputs, and a dismal reading may spur a test of the monthly low (0.8641) as it dampens bets for higher borrowing costs.

Australian Dollar Remains a Sell until this Changes 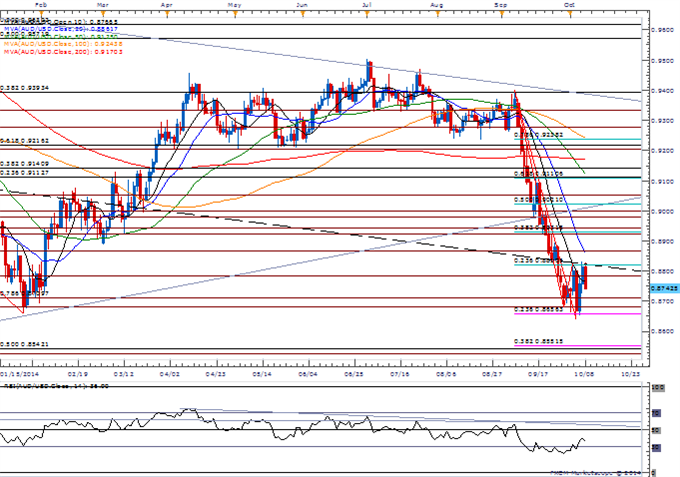 The Australian economy added 121K jobs in August, with the unemployment unexpectedly slipping to an annualized 6.1% from a 12-year high of 6.4% in July. Despite the ongoing improvement of the job market, it seems as though Reserve Bank of Australia (RBA) Governor Glenn Stevens will keep rates on hold throughout 2014 in an effort to further assist with the rebalancing of the real economy. Nevertheless, the better-than-expected reading propped up the Australian dollar, with the AUD/USD breaking above the 0.9200 handle, but the pair struggled to retain the gains throughout the Asia-Pacific trade, with the aussie-dollar ending the day at 0.9160.