- Reserve Bank of Australia (RBA) to Keep Cash Rate at 2.50% for 13-Consecutive Meetings.

The near-term rebound in the AUD/USD may be short-lived should the Reserve Bank of Australia (RBA) retain the verbal intervention on the higher-yielding currency.

Even though the RBA is widely expected to retain a period of ‘interest rate stability,’ Governor Glenn Stevens may continue to jawbone the Australian dollar in an effort to mitigate the downside risk surrounding the $1T economy.

The narrowing trade deficit along with the ongoing expansion in building activity may encourage the RBA to drop the verbal intervention on the Australia dollar, and the fresh batch of central bank rhetoric may generate a more meaningful correction in the AUD/USD should Governor Stevens show a greater willingness to move away from the easing cycle.

However, the slowdown in private sector consumption paired with the persistent slack in business outputs may push the RBA to adopt a more cautious tone for the region, and the AUD/USD may face a further decline should the central bank continue to highlight the slack in the real economy. 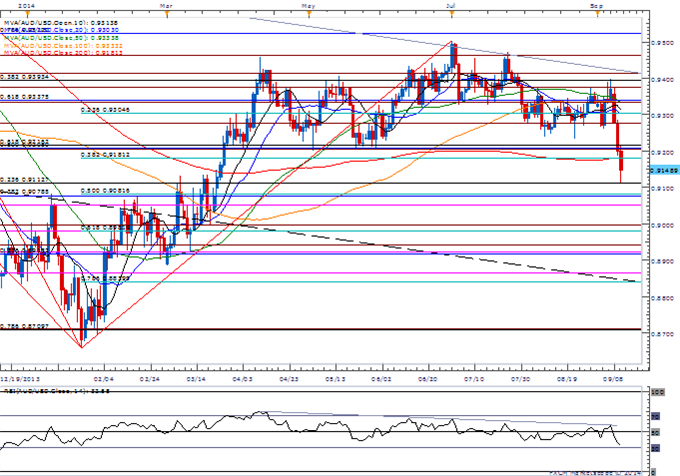 The Reserve Bank of Australia (RBA) kept the cash rate on hold at a record low of 0.25% for the 12-consective month as the central bank deems the current monetary policy ‘appropriate’ to support future economy growth. Governor Glenn Stevens reiterated that RBA would likely retain the neutral stance for a period of time in an effort to further assist with the rebalancing of the $1T economy. The neutral tone sparked a limited reaction in the Australia Dollar, with the AUD/USD consolidating below the 0.9300 handle and ending the day at 0.9297.