- U.S. Non-Farm Payrolls (NFP) to Pick Up From Lowest Print Since .

- Jobless Rate to Hold at 6.1% for Second Consecutive Month.

A pickup in U.S. Non-Farm Payrolls (NFP) may spur a further decline in the EUR/USD as the Federal Reserve is widely expected to halt its quantitative easing (QE) program at the October 29 policy meeting.

The deviation in the policy outlook certainly casts a long-term bearish outlook for the EUR/USD, but a further slowdown in job growth may generate a larger pullback in the dollar as it would allow the Federal Open Market Committee (FOMC) to further delay the normalization cycle.

The ongoing decline in planned job-cuts along with the pickup in private sector activity may spur a meaningful uptick in job growth, and a positive print may spur another round of dollar strength as it boosts interest rate expectations.

However, the slowdown in building activity paired with the persistent weakness in the housing market may drag on hiring, and another disappointing employment report may trigger a near-term decline in the greenback as it dampens bets of seeing the Fed normalize policy sooner rather than later. 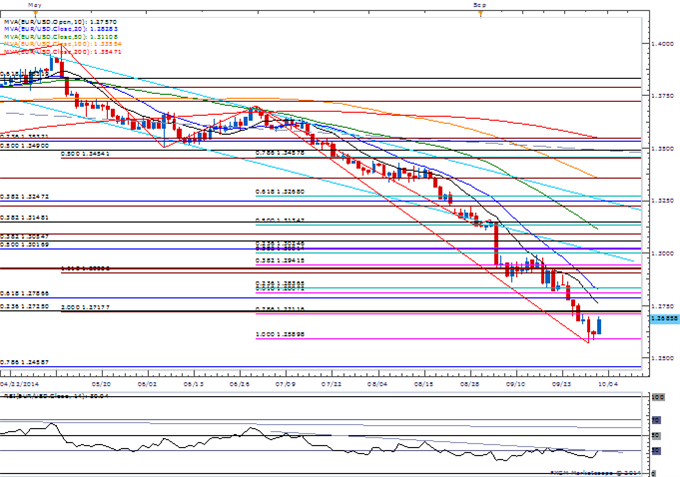 U.S. Non-Farm Payrolls (NFP) advanced only 142K in August to mark the slowest pace of growth for 2014 after climbing a revised 212K the preceding month. The jobless rate declined as expected to an annualized 6.1% from the prior month’s 6.2% as discouraged workers left the labor force, with participation rate slipping to 62.8% from 62.9%. The slowing recovery in employment may dampen the Fed’s scope to normalize policy sooner rather than later as Chair Janet Yellen remains in to rush to remove the zero-interest rate policy (ZIRP). The lower-than expected print dragged on the greenback, with the EUR/USD rising 28 pips right after the release to mark a fresh session high of 1.2988. However, the reaction was short-lived, with the pair consolidating during the rest of the North America trade to close at 1.2950.