- Will ECB President Mario Draghi Talk Down the Euro?

Further details surrounding the European Central Bank’s (ECB) asset-back securities (ABS) and covered-bond purchase program may heighten the bearish sentiment surrounding the Euro, but we may see a relief rally in the EUR/USD should the Governing Council use the interest rate decision as an attempt to buy more time.

The ECB may refrain from addressing the unanswered questions surrounding the non-standard measures as President Mario Draghi waits for the results of the second targeted long-term refinancing operation (T-LTRO), and the EUR/USD may face a near-term correction should the fresh developments dampen bets for more easing.

The ECB may sound increasingly dovish amid the growth threat for deflation, and the EUR/USD may face a further decline should the council keep the door open for more non-standard measures, which may quantitative easing (QE).

Nevertheless, the ECB may scale back its dovish outlook amid the improvements in the monetary union, and the Euro may face a near-term bounce should the central bank adopt a wait-and-see approach. 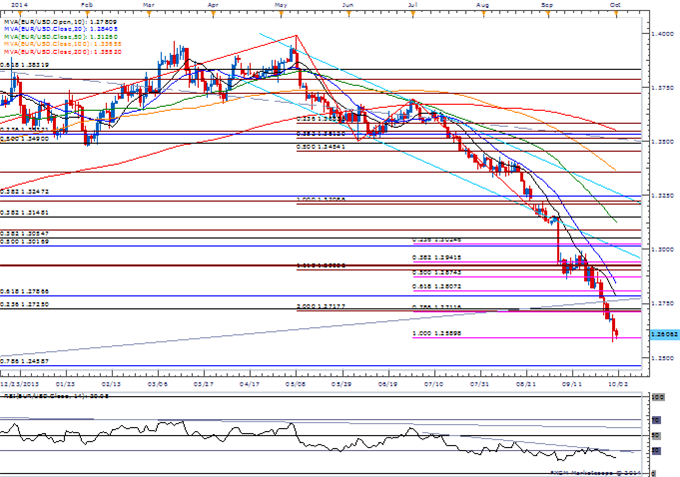 The European Central Bank unexpectedly cut the benchmark interest rate to fresh record low of 0.05% as the downside risks surrounding the growth outlook raises the threat for deflation. The Governing Council also laid out an asset-backed securities (ABS) purchasing plan to further boost private-sector lending, with details to be disclosed at the October 2 policy meeting. As a result, it seems as though the Euro will face additional headwinds over the near to medium-term as the ECB continues to push monetary policy into unchartered territory. The EUR/USD plummeted following the new wave of monetary support, with the pair dropping over 100 pips during the North American trade, but we saw a minor bounce going in the close as the euro-dollar ended the day at 1.2932.