- U.S. ISM Manufacturing Survey Expected to Fall Back from Highest Reading Since March 2011.

- Even Though Employment Component Narrowed in August, Still Marked the Second-Highest Print for 2014.

A downtick in the ISM Manufacturing survey may generate a bearish dollar reaction (bullish EUR/USD) should the data print dampen the outlook for growth and inflation.

At the same time, we will need to keep a close eye on the employment component as the highly anticipated Non-Farm Payrolls (NFP) report is expected to show the U.S. economy adding another 217K jobs in September, and a material downward revision in the key metrics may undermine the bullish sentiment surrounding the greenback as it drags on interest rate expectations.

The dollar may face a near-term correction should the ongoing slack in the real economy spur a marked slowdown in manufacturing, and a dismal ISM print may prompt the Fed to further delay its normalization cycle as Chair Janet Yellen remains reluctant to move away from the zero-interest rate policy (ZIRP).

Nevertheless, the resilience in private sector consumption may foster another unexpected uptick in the manufacturing survey, and a better-than-expected release may heighten the bullish sentiment surrounding the dollar as it raises the Fed’s scope to implement a rate hike sooner rather than later. 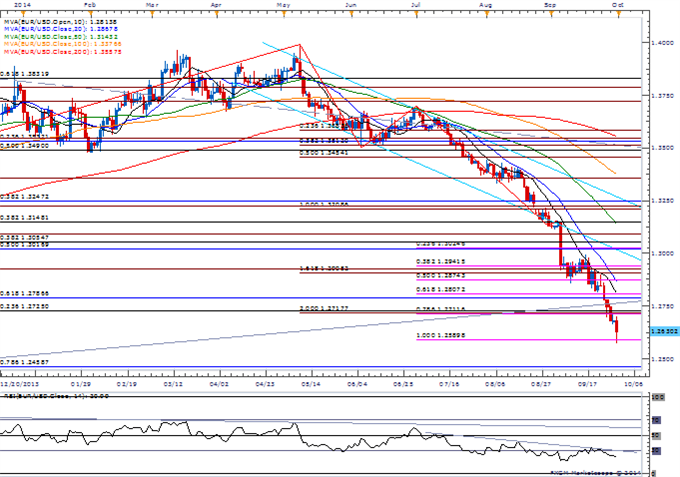 Manufacturing activity in the U.S. unexpectedly picked up in August as the ISM survey rose to 59.0 from July’s 57.1 print; reaching the highest level since March 2011. The expansion was fueled by a surge in orders for plastics and metals, and highlights the scope for a stronger U.S. recovery in the second half of the year. The market reaction to the positive ISM print was limited and short-lived as the EUR/USD chopped around 1.3128, with the pair closing the day at 1.3122.