EUR/USD Downside Targets Favored Ahead of ECB on Slowing Inflation

- Core Inflation to Hold Steady at 0.9% for Second Straight Month.

A further slowdown in the Euro-Zone’s Consumer Price Index (CPI) may prompt fresh monthly lows in the EUR/USD as it puts increased pressure on the European Central Bank (ECB) to implement more non-standard measures.

The ECB may continue to push monetary policy into uncharted territory as the Governing Council struggles to achieve its one and only mandate to deliver price stability, and the bearish sentiment surrounding the Euro may gather pace throughout the remainder of the year amid the weakening outlook for growth and inflation.

The persistent slack in the real economy may paint a weakened outlook for price growth, and a dismal CPI print may generate a bearish reaction in the EUR/USD should the report highlight a greater threat for deflation.

However, the unprecedented steps taken by the ECB may help to mitigate the downside risk for inflation, and a better-than-expected release may generate a more meaningful rebound in the Euro as it curbs bets of seeing a new wave of monetary support. 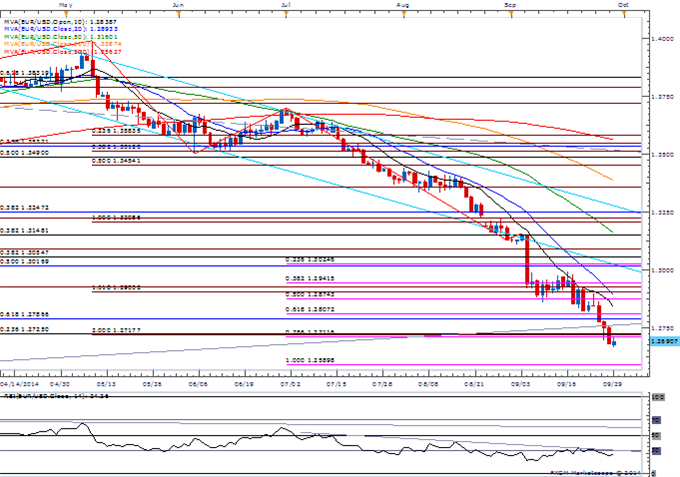 The Euro-Zone’s annualized Consumer Price Index (CPI) continued the downward trend and slipped to a 5-year low of 0.3% from 0.4% the month prior, while the core inflation rate unexpectedly rose 0.9% during the same period amid forecasts for a 0.8% print. The ongoing weakness in price growth may put increased pressure on the European Central Bank (ECB) to implement its own quantitative easing program amid the growing threat for deflation. Nevertheless, the initial reaction in the EUR/USD was short-lived as the pair consolidated around 1.3182 following the release, but the euro-dollar came under increased pressure during the North American trade as it ended the day at 1.3133.