A marked expansion in New Zealand’s trade deficit may spark fresh monthly lows in the NZD/USD as it dampens the outlook for growth and inflation.

The weakening outlook for global trade may drag on interest rate expectations as the Reserve Bank of New Zealand (RBNZ) adopts a neutral tone for monetary policy, and Governor Graeme Wheeler may keep the cash rate on hold throughout the remainder of the year in an effort to combat the downside risk surrounding the real economy.

The trade report may highlight a weakening outlook for growth as business confidence deteriorates, and a marked expansion in the trade deficit may keep the RBNZ on the sidelines as the central bank continues to weigh the impact of the rate hikes from earlier this year.

However, the improved terms of trade along withexpectations for a faster recovery may generate a better-than-expected print, and we may see central bank Governor Wheeler show a greater willingness to further normalize monetary policy should the data dampen the downside risks surrounding the New Zealand economy. 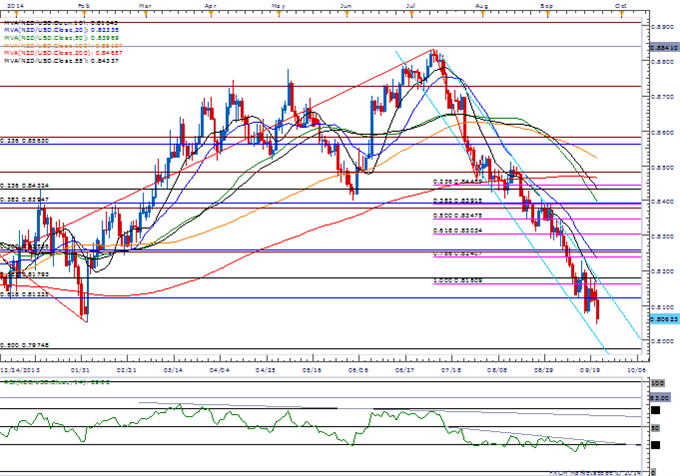 New Zealand’s trade balance showed a $692 million deficit in July after posting a $242 million surplus the month prior, with the region marking the first trade deficit in 11 months on the back of falling prices for dairy and forest product exports. The weakening outlook for global trade may continue to dampen the appeal of the New Zealand dollar as it limits the Reserve Bank of New Zealand’s (RBNZ) scope to normalize monetary policy at a more aggressive pace. Nevertheless, the impact of the disappointing print was limited and short-lived as the New Zealand dollar regained its strength following the Asian trade, with the NZDUSD closing the day at 0.8340.