- Canada Headline Inflation to Hold Above 2.0% for Fifth Consecutive Month.

- Core Consumer Price Index of 1.9% Would Mark Fastest Pace of Growth Since June 2012.

The USD/CAD may face a larger decline over the next 24-hours trading should Canada’s Consumer Price Index (CPI) raise the Bank of Canada’s (BoC) scope to further normalize monetary policy.

Sticky inflation may put increased pressure on the BoC to raise the benchmark interest rate sooner rather than later, and a strong inflation print may heighten the appeal of the Canadian dollar as central bank Governor Stephen Poloz scales back his dovish tone for monetary policy.

The pickup in household consumption may prompt Canadian firms to boost consumer prices, and an unexpected uptick in the core CPI may instill an improved outlook for the loonie as it boosts interest rate expectations.

However, lower input costs paired with the persistent slack in the real economy may drag on consumer prices, and a dismal print may generate higher-lows in the USD/CAD as it dampens the outlook for higher borrowing costs. 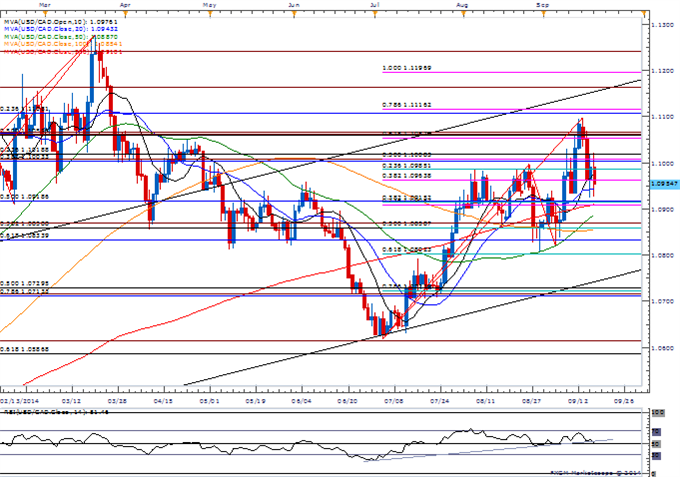 Dollar Gains Likely versus Yen, but Watch out for Euro and Sterling

The Canada Consumer Price Index (CPI) cooled to an annualized rate of 2.1% from 2.4% in June to mark the first slowdown since February 2014, led by lower transportation costs. The core rate of inflation also came below the estimate, with the figure slipping to 1.7% from 1.8% during the same period, and we may see the Bank of Canada (BoC) retain a rather neutral tone for monetary policy amid the ongoing slack in the real economy. Despite the weaker-than-expected print, the USDCAD slipped below 1.0940 following the release, with the pair ending the day at 1.0937.