- U.S. Advance Retail Sales to Increase for the Sixth Time in 2014.

- Rise of 0.6% Would Match Fastest Rate of Growth Since April.

The EUR/USD may face a further decline over the next 24-hours of trade should the U.S. Retail Sales report prop up interest rate expectations for the reserve currency.

A marked picked up in private sector consumption may encourage the Federal Open Market Committee (FOMC) normalize monetary policy sooner rather than later, and we may see a growing number of central bank officials adopt a more hawkish tone for monetary policy as the board looks to conclude its asset-purchase program at the October 29 meeting.

The expansion in private sector credit along with the uptick in wage growth may prompt a strong consumption reading for August, and a better-than-expected print may put increased downside pressure on the EUR/USD as it raises the outlook for growth and inflation.

However, sticky inflation paired with the slowdown in job growth may drag on household spending, and a dismal Retail Sales figure may prompt a larger correction in the dollar as it limits the Fed’s scope to move away from the zero-interest rate policy (ZIRP) ahead of schedule. 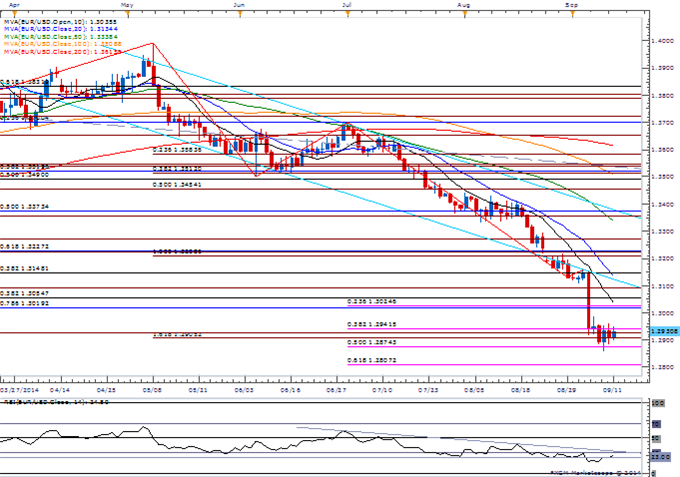 U.S. retail sales came in flat from June amid estimates of a 0.2% increase, largely drive by declines in Motor Vehicles, General Merchandise and Department Stores sales. The slowdown in consumption may indicate that the U.S. economy is expanding at a slow pace early on in the third quarter of 2014. The greenback weakened immediate following the dismal print, with the pair EUR/USD climbing above 1.3400, but the market reaction was short-lived as the pair ended the day at 1.3360, only 3 pips above the level prior to the release.