The EUR/USD may face a further decline over the next 24-hours of trade as the U.S. Non-Farm Payrolls (NFP) report is expected to show the world’s largest economy adding another 230K jobs in August while the jobless rate is expected to narrow to an annualized 6.1% from 6.2% the month prior.

Signs of a more robust recovery may further boost interest rate expectations as the Federal Open Market Committee (FOMC) is expected to halt its asset-purchase program at the October 29 meeting, and the bullish sentiment surrounding the U.S dollar may gather pace throughout the remainder of the year as a growing number of central bank officials show a greater willing to normalize monetary policy sooner rather than later.

The pickup in economic activity paired with the highest ISM employment prints for 2014 may highlight a further expansion in job growth, and an above-forecast NFP figure may spur fresh monthly lows in the EUR/USD amid the deviation in the policy outlook.

On the other hand, the recent slowdown in private-sector consumption - one of the leading drivers of growth - may generate another weaker-than-expect print, and a soft employment reading may spur a more meaningful pullback in the greenback as it dampens the outlook for the world’s largest economy. 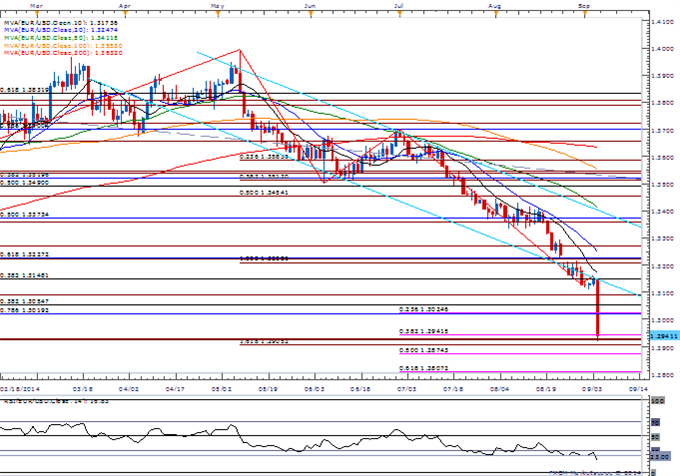 The U.S. economy added 209K jobs in July, following a revised 298K increase the month prior. The print was below the average estimate of 230K. The jobless rate unexpectedly rose to 6.2% from 6.1% in June as discouraged workers returned to the labor force. Nevertheless, the greenback lost ground following the below-forecast print, with the EUR/USD rallying to a high of 1.3443 going into the European close.