Despite expectations of seeing the European Central Bank (ECB) further embark on its easing cycle, the EUR/USD may face a short-squeeze should the Governing Council retain its current approach for monetary policy.

Why Is This Event Important:Indeed, there’s speculation that the ECB will cut interest rates further or even announce a more detailed asset-backed security (ABS) purchasing program amid the ongoing weakness in the monetary union, but the Governing Council may stick to the sidelines as President Mario Draghi continues to see a moderate recovery in the euro-area.

The stickiness in core inflation paired with lower unemployment may encourage the ECB to retain its current policy throughout 2014, and the EUR/USD may finally fill-in the gap from the end of August should the Governing Council make an attempt to buy more time.

Nevertheless, the ECB may implement additional monetary support amid the persistent weakness in the real economy, and the EUR/USD may continue to press fresh 2014 lows should the central bank loosen policy further.

Price & Time: The "Most Loved Rally in History" 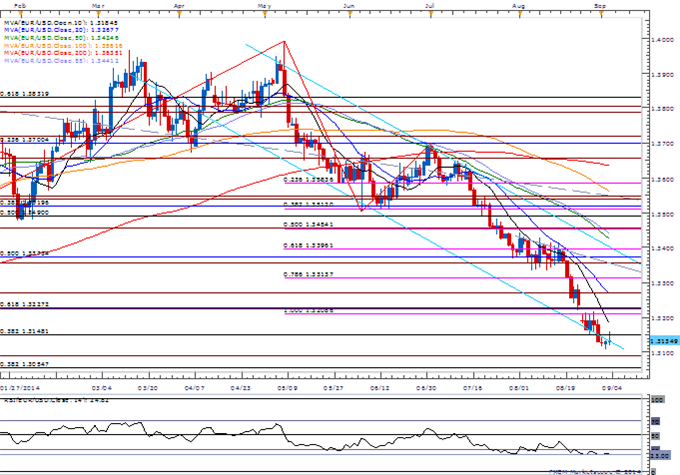 The European Central Bank kept the benchmark interest rate unchanged at 0.15% even as it saw a moderate and uneven recovery in the euro-area. However, ECB President Mario Draghi went onto say that the central bank had intensified the preparatory work for outright purchase of asset-backed securities (ABS), which suggests the ECB may embark on quantitative easing (QE) sooner rather than later. Despite the limited reaction, the EUR/USD largely struggled to hold its ground during the North American trade, with the pair ending the day at 1.3355.