- Economic Activity is Expected to Slow from the Highest GDP Print Since 1Q 2012.

The AUD/USD may face a larger decline over the next 24-hours of trade should Australia's 2Q Gross Domestic Product (GDP) report drag on interest rate expectations.

It seems as though the Reserve Bank of Australia (RBA) has concluded its easing cycle as Governor Glenn Stevens sees a period of ‘interest rate stability,’ but the central bank may come under increased pressure to implement additional monetary support should the GDP report dampen the outlook for growth and inflation.

Rising unemployment along with the weakening outlook for global trade may spur a marked slowdown in the $1T economy, and a dismal GDP print may push the AUD/USD back towards the 0.9200 handle as it renews bets for more monetary easing.

However, the pickup in private consumption paired with the ongoing expansion in building activity may generate a more meaningful expansion in the growth rate, and a positive development may spur a test of the August high (0.9373) as it raises the RBA’s scope to normalize monetary policy sooner rather than later.

Critical Week for the US Dollar - Can it Really Go Higher? 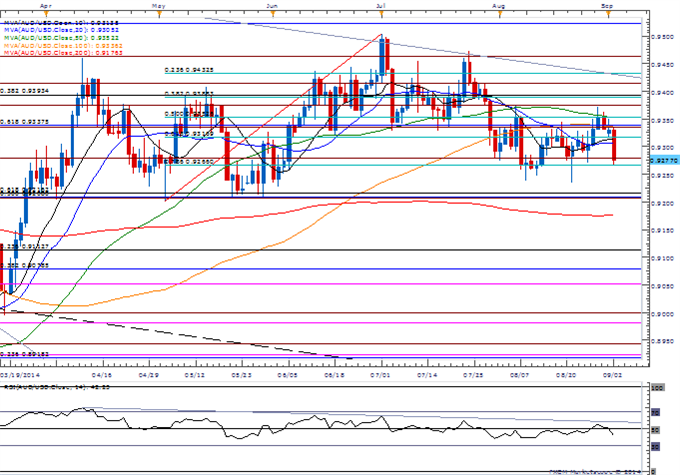 Australia’s economy expanded 1.1% during the first-quarter of 2014, accelerating from 0.8% during the last three-months 2013, with the figure beating the average estimate for a 0.9% clip. Strong exports contributed largely to the faster rate of growth, with net exports adding 1.4% points to the annualized Gross Domestic Product (GDP) figure. Nevertheless, it seems as though the RBA will continue to call for a period of interest rate stability amid bright signs coming out of the $1T economy. Despite the 20 pip jump in the AUD/USD, the initial reaction was short-lived, with the pair straddling the 0.9270 region throughout the Asia-Pacific trade.