- Core Inflation to Hold Steady at 0.8% for Third Consecutive Month

Another downside in the Euro-Zone’s Consumer Price Index (CPI) may heighten the bearish sentiment surrounding the EUR/USD as it puts increased pressure on the European Central Bank (ECB) to further embark on its easing cycle.

ECB President Mario Draghi may show a greater willingness to implement more non-standard measures at the September 4th meeting should the CPI print show a larger threat for deflation, and the EUR/USD may continue to weaken throughout the second-half of 2014 as interest rate expectations deteriorate.

The slowdown in business outputs paired with the renewed weakness in private sector consumption may drag on price growth, and the growing risk for deflation may push the ECB to adopt more emergency measures in an effort to achieve its one and only mandate to deliver price stability.

The pickup in producer prices along with the expansion in the money supply may limit the downside risk for inflation, and a better-than-expected CPI print may encourage a more meaningful rebound in the EUR/USD as it gives the ECB greater scope to retain its current approach for monetary policy.

Price & Time: Cue the "Most Hated Rally in History" Talk 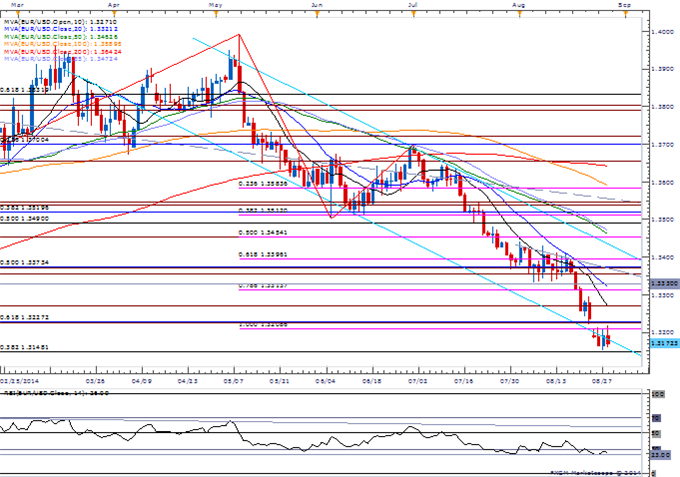 The Euro-Zone Consumer Price Index (CPI) narrowed to an annualized rate of 0.4% from 0.5% the month prior, hitting a 5-year low. The print was also below the average estimate of 0.5%. Even though the core rate of inflation held steady at 0.8% for the second-month, price growth remains well below the ECB’s 2.0% target. Nevertheless, the ECB argued that lackluster print was attributed to volatile components, such as food and energy. However, there is no evidence that the inflation would pick up with the target soon, since ECB just announced a rate cut in June. The pair EUR/USD declined slowly after the release of the Eurozone CPI, but came back soon after and ended the day at 1.3386.