Euro Rebound to Benefit From Another Decline in German Unemployment

- Jobless Rate to Hold at Annualized 6.7% for Six Straight Months.

Germany’s Unemployment report may generate a more meaningful rebound in the EUR/USD should the data highlight an improved outlook the euro-area’s largest economy.

Why Is This Event Important:Despite fears of a slowing recovery in the monetary union, a further decline in unemployment may keep the European Central Bank (ECB) on the sidelines throughout the remainder of 2014, and a further improvement in the economic outlook may limit the downside risks for the EUR/USD as market participants scale back bets for more non-standard measures.

Stronger consumption paired with the pickup in business outputs may generate a larger-than-expected decline in unemployment, and a positive development may encourage a more meaningful rebound in the EUR/USD as it gives the ECB greater scope to retain its current policy throughout the remainder of the year.

However, the ongoing decline in business sentiment along with the weakening outlook for global trade may drag on the labor market, and an unexpected rise in unemployment may trigger a bearish reaction in the EUR/USD as it fuels bets for additional monetary support.

Join DailyFX on Demand for Real-Time SSI Updates Ahead of German Unemployment! 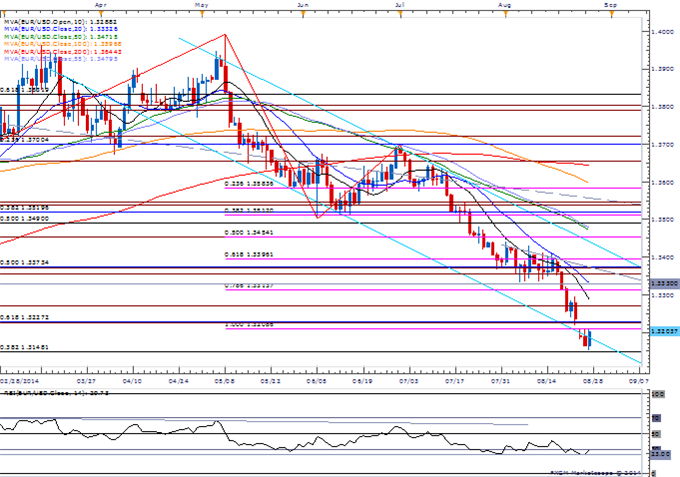 Unemployment in German shrank by 12,000 in July, more than the average estimate for a 5,000 decline, while the jobless rate was unchanged at 6.6% as in June. However, the Euro fell against the US Dollar after the release, though the pair came back later during the North America trade. Despite the better-than-expected data, it seems as though one single good print may not be strong enough to shift the near-term outlook for the EUR/USD as it remains in a downward trend.