A 8.0% rise in demand for U.S. Durable Goods may spur a bullish reaction in the greenback (bearish EUR/USD) as it raises the scope for a stronger recovery in the second-half of 2014.

It seems as though the Federal Open Market Committee (FOMC) is running out of arguments to retain its highly accommodative policy stance amid the ongoing improvements in the world’s largest economy, and the bullish sentiment surrounding the dollar may gather pace throughout the coming months should we see a growing number of central bank officials adopt a more hawkish tone for monetary policy.

The pickup in household sentiment along with the resilience in private sector consumption may generate increased demand for U.S. Durable Goods, and a positive print may heighten the bullish sentiment surrounding the dollar as it raises the outlook for growth and inflation.

However, sticky inflation paired with subdued wage growth may drag on demand for large-ticket items, and a dismal development may serve as a fundamental catalyst to spur a larger correction in the reserve currency as it weighs on interest rate expectations. 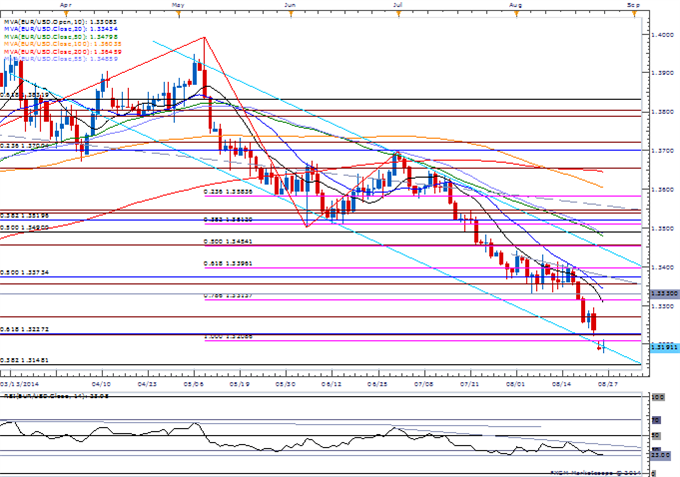 Impact that the U.S. Durable Goods report has had on EUR/USD during the last release

Orders for U.S. Durable Goods accelerated at a rate of 0.7% in June, exceeding estimates for 0.5% rise. The print was also much better than that in May, which showed a revised 1.0% contraction. The strength mainly came from increase in demand for commercial aircraft and machinery. However, the better-than-expected figure had a limited impact on the dollar. During the rest of the North America trade, the EUR/USD fluctuated around 1.3430 and closed at 1.3429.