- Canada Headline Inflation to Hold Above 2.0% for Fifth Consecutive Month.

- Core Consumer Price Index of 1.9% Would Mark Fastest Pace of Growth Since June 2012.

Despite expectations for a downtick in Canada’s Consumer Price Index (CPI), the stickiness in core inflation may spur a larger decline in the USD/CAD as it puts increased pressure on the Bank of Canada (BoC) to move away from its neutral policy stance.

Even though BoC Governor Stephen Poloz talked down the risk for higher interest rates, the growing risk for a prolonged period of above-target inflation may push the central bank to adopt a more hawkish tone for monetary policy in an effort to promote price stability.

The pickup in private sector consumption may heighten price pressures in Canada, and a strong inflation print may spur a more meaningful correction in the USD/CAD as it boosts interest rate expectations.

Nevertheless, slowing wage growth paired with the ongoing weakness in private lending may spur a softer-than-expected CPI print, and a marked slowdown in price growth may trigger a more meaningful run at the 1.1100 handle as it dampens bets for higher interest rates. 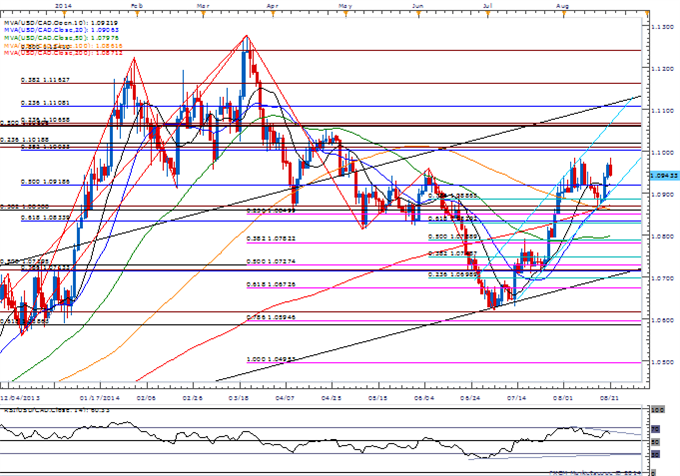 The annualized inflation rate hit a two-year high of 2.4%, beating an average estimate of 2.3%. The core Consumer Price Index (CPI) reading also exceeded market forecast and climbed 1.8% after expanding 1.7% in May. Bank of Canada Governor Stephen Poloz stressed that the faster rate of price growth was mainly due to transitory factors, including energy and import costs, and expects inflation to slow over the next two years as the central bank retains a “neutral” view for monetary policy. The Canadian dollar jumped following the better-than-expected print, with USD/CAD dipping below the 1.0710 handle. After a quick comeback, the pair moved sideways during the rest of the North American trade and closed at 1.0727.