GBP/USD Weekly Opening Gap in Focus Ahead of U.K. CPI

- Core Rate of Inflation to Fall Back From Fastest Pace of Growth This Year.

A slowdown in the U.K.’s Consumer Price Index (CPI) may help to close the weekly opening gap in the GBP/USD should the inflation report drag on interest rate expectations.

The Bank of England (BoE) may continue to soften its hawkish tone for monetary policy as the central bank cuts its outlook for U.K. wage growth, and a weaker-than-expected CPI print is likely to trigger a bearish reaction in the GBP/USD as market participants scale back bets of seeing a rate hike in 2014.

U.K. firms may conduct heavy discounting amid weak wage growth paired with the slowdown in private sector consumption, and a dismal CPI reading may instill a more bearish outlook for the GBP/USD as it reduces the BoE’s scope to normalize monetary policy sooner rather than later.

The pickup in private sector lending along with expectations for a faster recovery may generate another stronger-than-expected inflation print, and the pound-dollar may continue to push off of the 200-Day SMA (1.6662) should the data print boost rate expectations. 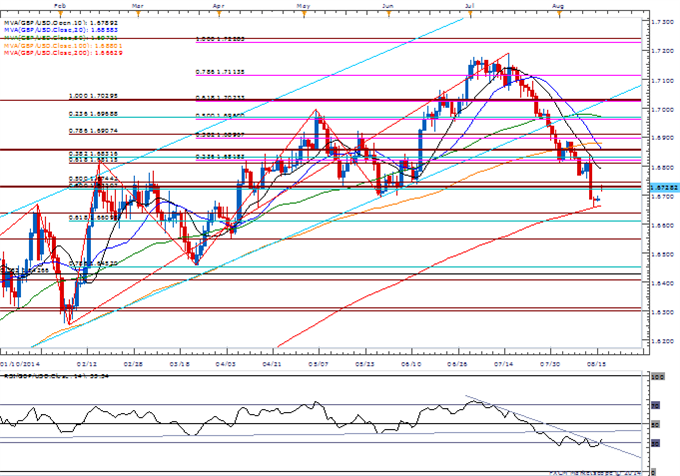 The U.K.’s Consumer Price Index (CPI) expanded sharply at an annualized rate of 1.9% in June, beating the average estimate of 1.6%. The core CPI also exceeded market forecast to reach 2.0% from 1.6% the month prior. The print was mostly pushed up by clothing & footwear and food & beverage. The larger-than-expected figure boosted the pound, with the GBP/USD climbing to a high of 1.7190 during the North American trade. However, the GBP/USD consolidated going the close, with the pair ending the day at 1.7146.