- Germany GDP to Contract for First Time Since 4Q 2012

- Will the ECB Look Towards Quantitative Easing (QE) as Growth Disappoints?

The EUR/USD remains at risk of extending the decline from earlier this month should Germany’s Gross Domestic Product (GDP) report put increased pressure on the European Central Bank (ECB) to further embark on its easing cycle.

Why Is This Event Important:Indeed, an economic contraction in Europe’s growth engine may highlight an increased threat for deflation, and ECB President Mario Draghi may show a greater willingness to implement more non-standard measures in 2014 in an effort to encourage a more sustainable recovery in the monetary union.

The ongoing weakness in business sentiment along with the slowdown in production may generate a marked decline in the growth rate, and a dismal GDP report may heighten the bearish sentiment surrounding the EUR/USD as market participants ramp up bets for more monetary easing.

However, the decline in unemployment paired with the pickup in private sector consumption may alleviate the downside risks for the German economy, and a positive development may encourage a more meaningful correction in the EUR/USD as it limits the ECB’s scope to further embark on its easing cycle in 2014.

Join DailyFX on Demand for Real-Time SSI Updates Ahead of German GDP! 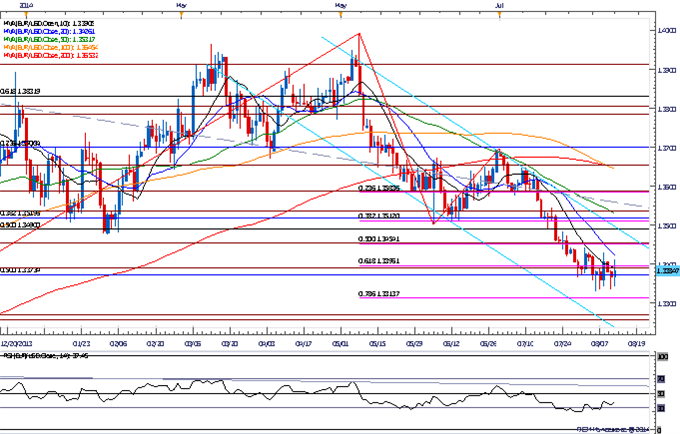 The German economy grew another 0.8% in first-quarter after expanding 0.4% during the last three-month of 2013, but the European Central Bank (ECB) may have a little choice but to further embark on its easing cycle as the monetary union continues to face a risk for deflation. Despite the muted reaction to the better-than-expected GDP print, the EUR/USD struggled to hold its ground during the European trade, with the pair slipping below the 1.3700 handle, but the single currency firmed up during the North American session to end the day at 1.3707.