The Bank of England’s (BoE) Inflation report is likely to heavily influence the near-term outlook for the GBP/USD as the central bank looks to move away from its easing cycle.

Indeed, the updated forecasts for growth and inflation is likely to spur increased volatility in the British Pound, but we would need to see Governor Mark Carney show a greater willingness to normalize monetary policy in 2014 for the GBP/USD to resume the upward trend carried over from the previous year.

Sticky inflation paired with the ongoing improvement in the labor market may spur a greater dissent within the Monetary Policy Committee (MPC), and the GBP/USD may carve a key low in August should the fresh batch of central bank rhetoric boost interest rate expectations.

Nevertheless, the BoE may introduce a more relaxed approach in normalizing policy amid the ongoing slack in the U.K. economy, and the GBP/USD may face a larger decline over the remainder of the month if Governor Carney adopts a more neutral tone for monetary policy.

GBPUSD Shorts at Risk Above 1.68 Heading Into BoE, Inflation Data 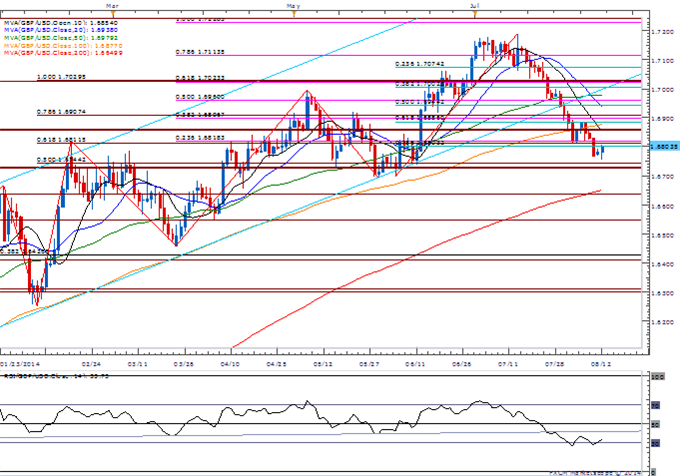 The Bank of England (BoE) struck an improved outlook for the U.K. economy and said that spare capacity has ‘narrowed’ somewhat, but the fresh batch of central bank rhetoric did little to boost interest rate expectations as Governor Mark Carney argued that there needs to be a further reduction in the economic slack before the Monetary Policy Committee (MPC) can start to normalize monetary policy. The British Pound struggled to hold its ground following the statement, with the GBP/USD dipping below the 1.6800 handle, and the sterling continued to weaken during the U.S. trade as the pair ended the day at 1.6764.