U.S. Non-Farm Payrolls (NFP) are anticipated to increase another 231K in July, and a positive employment print may produce a further decline in the EUR/USD as it puts increased pressure on the Federal Reserve to normalize monetary policy sooner rather than later.

The deviation in the policy outlook favors a bearish outlook for the EUR/USD as the European Central Bank (ECB) stands ready to implement more non-standard measures, and the NFP print may generate fresh 2014 lows in the euro-dollar should the release boost the interest rate outlook for the U.S.

The resilience in private consumption along with the marked rebound in economic activity may encourage firms to further expand their labor force, and a better-than-expected NFP print should produce a bullish reaction in the U.S. dollar as puts increased pressure on the Federal Open Market Committee (FOMC) to move away from its zero-interest rate policy (ZIRP).

However, the downturn in business confidence along with the rise in planned job cuts may produce further headwinds for the U.S. labor market, and a dismal employment report may undermine the bullish sentiment surrounding the reserve currency as it raises the Fed’s scope to retain the highly accommodative policy stance for an extended period of time. 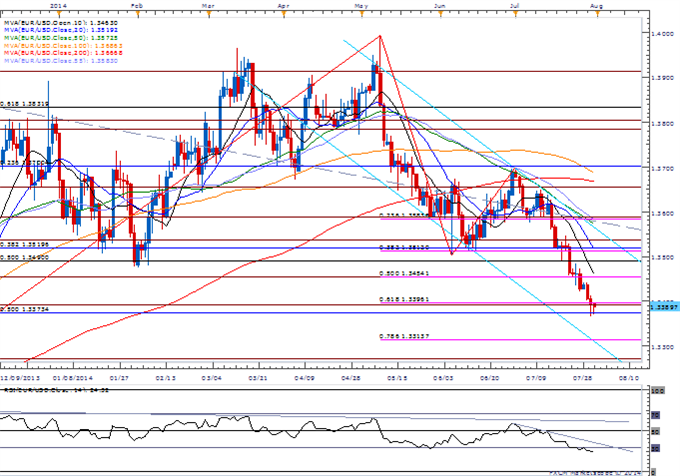 The U.S. economy added another 288K jobs in June following a revised 224K advance the month prior, while the jobless rate unexpectedly narrowed to an annualized 6.1% from 6.3% in May. The better-than-expected NFP print propped up the greenback, with the EUR/USD slipping below the 1.3625 region, and the reserve currency retained the bullish reaction going into the end of the week as the pair closed at 1.3608.